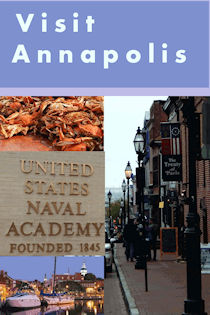 The planning for such a trip was relatively simple - we used to live in the Northern Virginia area (near Washington D.C.) and we had been to Annapolis many times in the past. Good seafood is widely available, and the town is very walkable.

We decided that we would fly into Richmond, VA so that we could visit our cabin in Lake Anna, VA and then drive up to Annapolis on Friday morning. This would allow us to avoid the D.C. "rush hour" and to arrive at our hotel close to check-in time.

Rental car selection was made via Hertz, and with those logistical decisions made, we were ready to go.

How we got to Annapolis from Florida

Allegiant Airlines (a very low-cost airline) has recently started flights to Richmond from the Sarasota Airport (SRQ). We have been utilizing Allegiant Airlines for several years now, but in the past we had to drive to the St. Petersburg Airport. Allegiant does not fly this route every day, but often enough for a weekend trip. Their air fares are considerably less expensive than other airlines, so even though they use the least comfortable passenger seats we have ever sat in, the low cost and short flight to Richmond (one hour forty minutes) is too good to pass up!

We had selected the Hilton Garden Inn Downtown Annapolis during our trip planning because of it's good downtown location. As the hotel is located on West Street two blocks from the St. Anne's Parish Church, the City Dock area was only a few blocks away. It also meant that Route 50 was perhaps two miles away, providing us with easy access to either the east or west-bound Interstate.

This was a very comfortable hotel, good sized room with a king bed, large flat panel TV and a large bathroom. Really there was no view, but then we did not require one as our plans called for us to be out & about most of the time.

The hotel provides valet parking only, a wee bit pricey but this meant that the rental car was in a safe location whenever we were not using it.

NOTE: Images are the property of Hilton Hotels

St. Anne's Episcopal Church is an historic Episcopal church located in Church Circle, Annapolis. The first church in Annapolis, it was founded in 1692 to serve as the parish church for the newly created Middle Neck Parish, one of the original 30 Anglican parishes in the Province of Maryland.

St. Anne's was founded in 1692 after the passing of the Establishment Act. The Act allowed for the construction of the State House, King William's School, and St. Anne's, though due to the limited work force and insufficient funds, all of the projects were finished much later than expected.

Work on St. Anne's started out slowly. In 1699 the General Assembly specified that the dimensions of the church were to be 65 ft wide (20 m) and 30 ft long (9.1 m) with a porch and a tower that would hang a bell. But due to the insufficient funds, no progress was made until 1700, when the government invested enough money to begin construction.

By 1704, the church was finished, though some changes were made in the structure. It served Chapel River until 1715, when the Province of Maryland was returned to Lord Baltimore. A bell, which would call parishioners to services until it was destroyed by fire in 1858, was donated to St. Anne's by Queen Anne.

Since St. Anne's was often referred to by writers of the time as a "barn" rather than a "proper place of worship", many locals asked the government for a new church in 1775. Their wish was granted, and in late 1775, the church was razed.

NOTE: Image is the property of Just Traveling Thru, LLC

Annapolis is a very walkable city, our hotel was perhaps a half mile from the City Dock area and to get there, all we had to do was to walk east along West Street.

In the fourth image, you can see the City Dock area in the center background, perhaps a 1/4 mile from St. Anne's Parish Church.

We looked at posted menus for several restaurants before arriving at the Middleton Tavern, and we decided that this was where we wanted to go because the great smells coming out of the kitchen, coupled with the really good menus and prices, made the decision easy for us!

After lunch, we decided to walk off those calories by strolling over to the Naval Academy which was only one block away from the Middleton Tavern. We entered the grounds through the John Barry gate.

Note: Entrance to the Naval Academy requires a photo ID, and as I had left my wallet back at the hotel, we could not enter the Academy. Talk about disappointed, but the hotel was a mile away and we decided that we would forego the Academy tour until another day.

As you can see in these images, the Naval Academy is immediately adjacent to the City Dock area, which is always an entertaining place to walk about. Turns out the Annapolis Boat show was scheduled to take place on Sunday, but we did not have the time available to attend.

As you can see in these images, the walk back to the hotel from the harbor area was not only pretty but we also ran across some interesting chicken statues.

Image is the property of Just Traveling Thru, LLC

As the Sailor Oyster Bar was next door to our hotel, and not only does it get good reviews, but the kitchen smells were amazing, we decided to give it a try.

As you can see in these pictures, this is not a large restaurant! The menu is very good, but may not be for every taste. The trout fish dip (image #3) was excellent !

Celeste had the fish chowder (image #2) and we both agreed that it was excellent. I had the mussels and they were a nice size and came in a broth that was perfect. We both had a white wine, and the dinners were served soon after we had made a dent in the trout fish dip.

We had the chocolate peanut butter truffles for dessert, and they were delicious!

To view our entire set of images from Annapolis, MD, click here