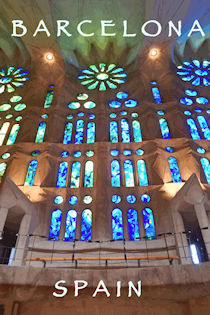 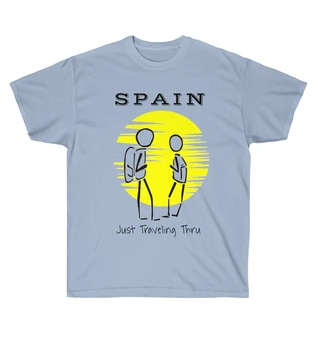 Shop Now
This was the final Port for the Norwegian Cruise Lines 'Epic' repositioning cruise from Port Canaveral, FL to Barcelona with various stops along the way.


We had decided to spend some additional time here after the cruise, for several reasons, ie; I had been here repeatedly while in the Navy and was interested in seeing how the city had evolved. Celeste had not previously been here, so both of us were looking forward to doing some exploration of the city.

A quick Barcelona History Lesson: Barcelona is 5,283.5 sea miles from Port Canaveral and 153 sea miles from Palma de Mallorca. It is the capital and largest city of the autonomous community of Catalonia, as well as the second most populous municipality of Spain. With a population of 1.6 million within city limits, its urban area extends to numerous neighbouring municipalities within the Province of Barcelona and is home to around 4.8 million people, making it the sixth most populous urban area in the European Union after Paris, London, Madrid, the Ruhr area and Milan. It is one of the largest metropolises on the Mediterranean Sea, located on the coast between the mouths of the rivers Llobregat and Besòs, and bounded to the west by the Serra de Collserola mountain range, the tallest peak of which is 512 metres (1,680 feet) high.

Founded as a Roman city ( known as "Barcino"), in the Middle Ages Barcelona became the capital of the County of Barcelona. After merging with the Kingdom of Aragon, Barcelona continued to be an important city in the Crown of Aragon as an economic and administrative centre of this Crown and the capital of the Principality of Catalonia. Barcelona has a rich cultural heritage and is today an important cultural centre and a major tourist destination. Particularly well known are the architectural works of Antoni Gaudí and Lluís Domènech i Montaner, which have been designated UNESCO World Heritage Sites. The headquarters of the Union for the Mediterranean are located in Barcelona. The city is known for hosting the 1992 Summer Olympics as well as world-class conferences and expositions and also many international sport tournaments.

Barcelona is one of the world's leading tourist, economic, trade fair and cultural centres, and its influence in commerce, education, entertainment, media, fashion, science, and the arts all contribute to its status as one of the world's major global cities. It is a major cultural and economic centre in southwestern Europe, 24th in the world (before Zürich, after Frankfurt) and a financial centre. In 2008 it was the fourth most economically powerful city by GDP in the European Union and 35th in the world with GDP amounting to €177 billion. In 2012 Barcelona had a GDP of $170 billion; and it was leading Spain in employment rate in that moment.

Click here to go to the Barcelona Wikipedia Page to read more about the city & it's history.

The Norwegian Epic arrived in Barcelona harbor very early at approximately 5:00AM. Our game plan was to wait until the last possible minute to disembark and let the crowds diminish. We had a hotel room reserved at the Alexandra Hilton Hotel, so there was no need to hurry. However, even though Norwegian had originally indicated that we could depart the ship as late as 11AM, the "Freestyle Daily" ship's bulletin made it clear that everyone had to disembark no later than 8AM - so our "remain flexible" rule was utilized.
I had visited Barcelona numerous times while in the Navy, and Celeste had never been there. However, in the years since I had last been here, the city had grown considerably and in fact the harbor had been extensively expanded since my Navy days. The port area where my ship used to tie up had been converted to a marina (and other facilities) named Port Vell . 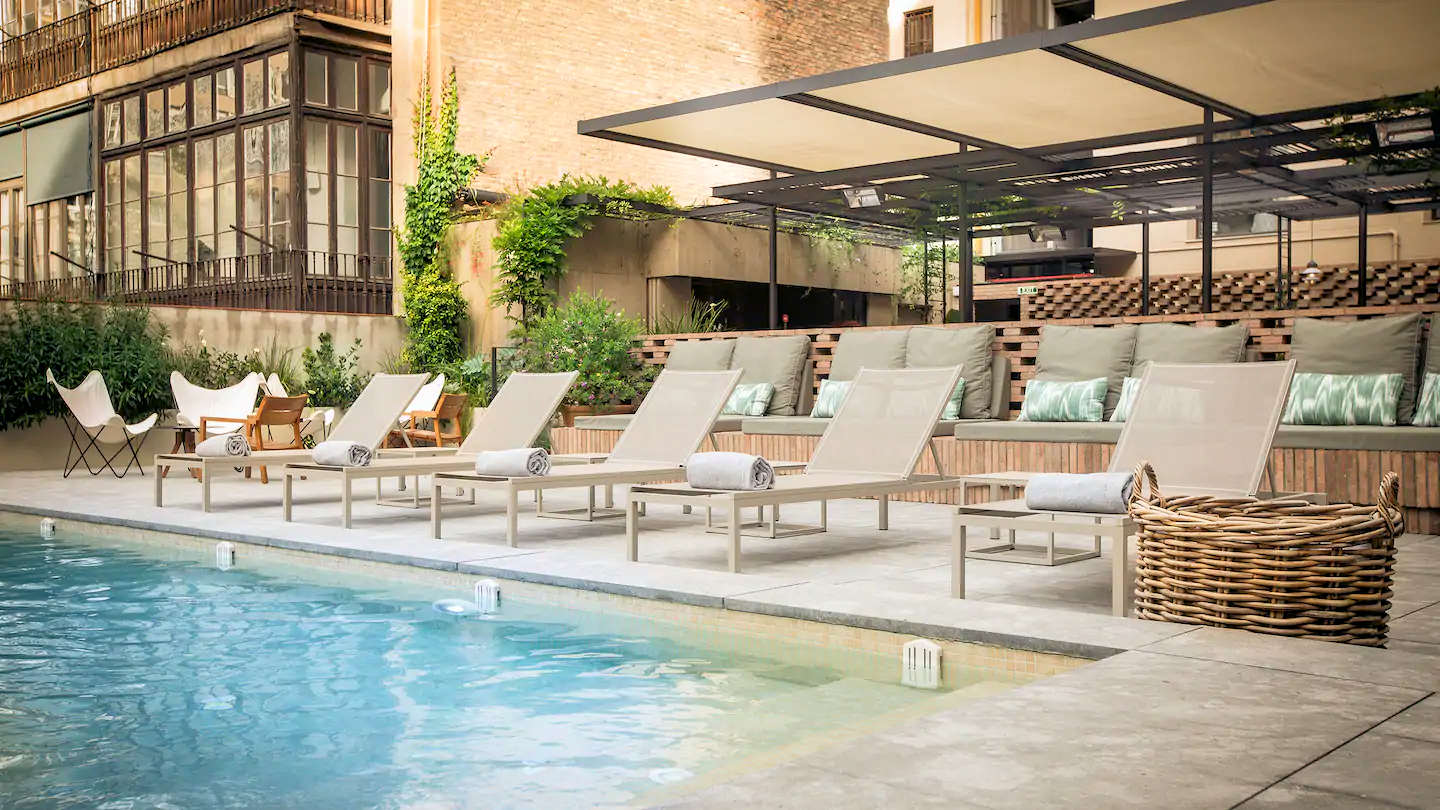 We had made plans to remain in Barcelona for several days, and had selected the Alexandra Hilton Hotel on Carrer de Mallorca as our place to stay. The hotel is just a few meters away from Rambla de Catalunya, which turns into La Rambla as you get nearer to the harbor. The hotel is also less than one kilometer away from the La Sagrada Familia, which was on our "must see" list. Very nicely situated hotel, very modern, quiet & comfortable - the staff there are very polite and helpful & speak excellent english.
NOTE: The Rambla de Catalunya is a wide boulevard with a large island in the center of the road, which has a number of of nice sidewalk cafes & pubs.

NOTE: Images are the property of Hilton Hotels 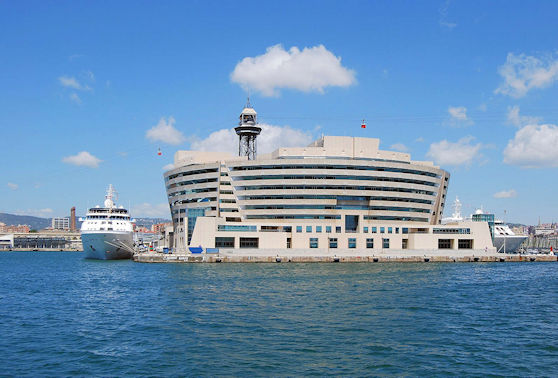 Image # 1 (left side) gives you some idea of the size of the Barcelona Harbor, it is comprised of; an industrial/commercial (freighter/cargo ships) area, a large area devoted to Cruise Ships, and a marina area for smaller vessels.

The building in the lower center of image # 1 (left side) is the Barcelona World Trade Center, shown in image # 2 (right side).
NOTE: Images are the property of Cruise Mapper

Our first destination (after dropping off our luggage at the hotel) was the Sagrada Familia. The Familia is located 2.1 kilometers north-east of our hotel, and we could walk there all the way on the Carrer de Mallorca.

The Temple Expiatori de la Sagrada Família ("Expiatory Church of the Holy Family") is a large unfinished Roman Catholic church in Barcelona. Designed by Catalan architect Antoni Gaudí (1852–1926), his work on the building is part of a UNESCO World Heritage Site. In November 2010, Pope Benedict XVI consecrated the church and proclaimed it a minor basilica.
NOTE: Click here to watch a video we made of this church and area.

The building had a "street fair" kind of thing going on near the entrance, where groups of people were forming "human pyramids", throwing people into the air and catching them, vendors were selling souvenirs, etc. Our goal was to purchase tickets and go inside the building - but watching these groups perform was entertaining!

The Sagrada Familia is one of the world's largest Church buildings: from the entrance to the apse it is 90 metres, the five naves are limited by a 60 metre long and 45 meters wide transept. The four side naves are 7.5 metres wide each, the main nave is 15 metres - exactly twice as wide. The vault of the main nave is 45 metres high, and the side aisles are 30 metres high.

The interior columns are inclined and utilize "tree like branches". The weight is routed directly over the pillars in the ground - all this without bearing facade or exterior buttresses. The result of this ingenious solution is spectacular: the pillars and arches supported by them transform the interior of the temple into a stone forest of palm trees, lots of light streaming in through large windows and the vault.

Our hotel was a very short distance from the Rambla de la Catalunya; a wide boulevard with an area in the center for pedestrians and various sidewalk vendors such as small restaurants. We had walked by some of these restaurants during our hike around the city, and decided to have dinner at one of them on our first evening.

Image property of ChristianSchd via Wikipedia

Image property of FrancoisLagunas via Wikipedia

Our morning's first adventure was a walk to the Casa Batlló, tt was designed by Antoni Gaudí (the architect of the Basílica de la Sagrada Família & the mosaics of Park Güell), and is considered one of his masterpieces. A remodel of a previously built house, it was redesigned in 1904 by Gaudí and has been refurbished several times after that. Gaudí's assistants Domènec Sugrañes i Gras, Josep Canaleta and Joan Rubió also contributed to the renovation project. The local name for the building is Casa dels ossos (House of Bones), as it has a visceral, skeletal organic quality.

Image property of Tabletpc2 via Wikimedia

Our hotel was just a few meters from the Rambla de Catalunya, which as you walk towards the harbor, eventually turns into La Rambla the famous shopping district. The street name change takes place at the Plaça de Catalunya, and then La Rambla continues all the way to the Mirador de Colom which is adjacent to the Harbor.

The tree-lined central promenade of La Rambla is crowded during the day and until late in the night. Its origins as a watercourse are reflected in the paving design, which appears to ripple like water. Along the promenade's length are kiosks that sell newspapers and souvenirs, other kiosks selling flowers, street traders, performers, and pavement cafes and bars. Several notable sights are also located within the promenade, including a mosaic by Joan Miró and the Font de Canaletes, a fountain and popular meeting point.

Along the Rambla are historic buildings as the Palace of the Virreina and the Liceu Theatre (Liceo in Spanish), in which operas and ballets are staged. The La Boqueria market opens off the Rambla and is one of the city's foremost tourist landmarks, housing a very diverse selection of goods.
Click here to read a good Wiki Article about this famous area.

Image property of L736E via Wikipedia

Image property of Lolo42 via Wikipedia

After walking south through La Rambla we arrived at the harbor, and decided to take one of those double decker bus tours around the city - this would allow us to see a great deal more of Barcelona than by foot and we could leave the bus tour at Montjuic Castello.

Montjuïc Castle is an old military fortress, with roots dating back from 1640, built on top of Montjuïc hill, high above the Harbor of Barcelona. It currently serves as a Barcelona municipal facility. The eastern side of the castle sits on a cliff providing amazing views of the Barcelona Harbor, which gave the fortress a commanding view of ships arriving.

The castle is surrounded by the Jardins de Joan Brossa, a beautiful large park which you can traverse by a cable car (Teleferic de Montjuïc) or by foot. We choose to ride the gondola, as we wanted to maximize our time in the castle.

The name "Montjuic" comes from Latin for "Jewish Mountain", and there was originally a Jewish cemetary in this area.

The Dogs of Barcelona

We saw dogs everywhere we went in Barcelona, sometimes in groups, most often singly. There was even a dog park next to the Sagrada Familia. Obviously people in Barcelona are fond of dogs, and because we are too, we decided to show these images!
Because we continually saw dogs everywhere we went, we took the time to look up the statistics. The top six "dog population" countries in Europe are; Germany, United Kingdom, Poland, Italy, France and Spain. Which was a surprise to us as we had never seen quite so many dogs in any of those countries. Click here to go to the statistics page to read more.

To view our entire set of images from Barcelona Spain, click here