A Visit to Munich 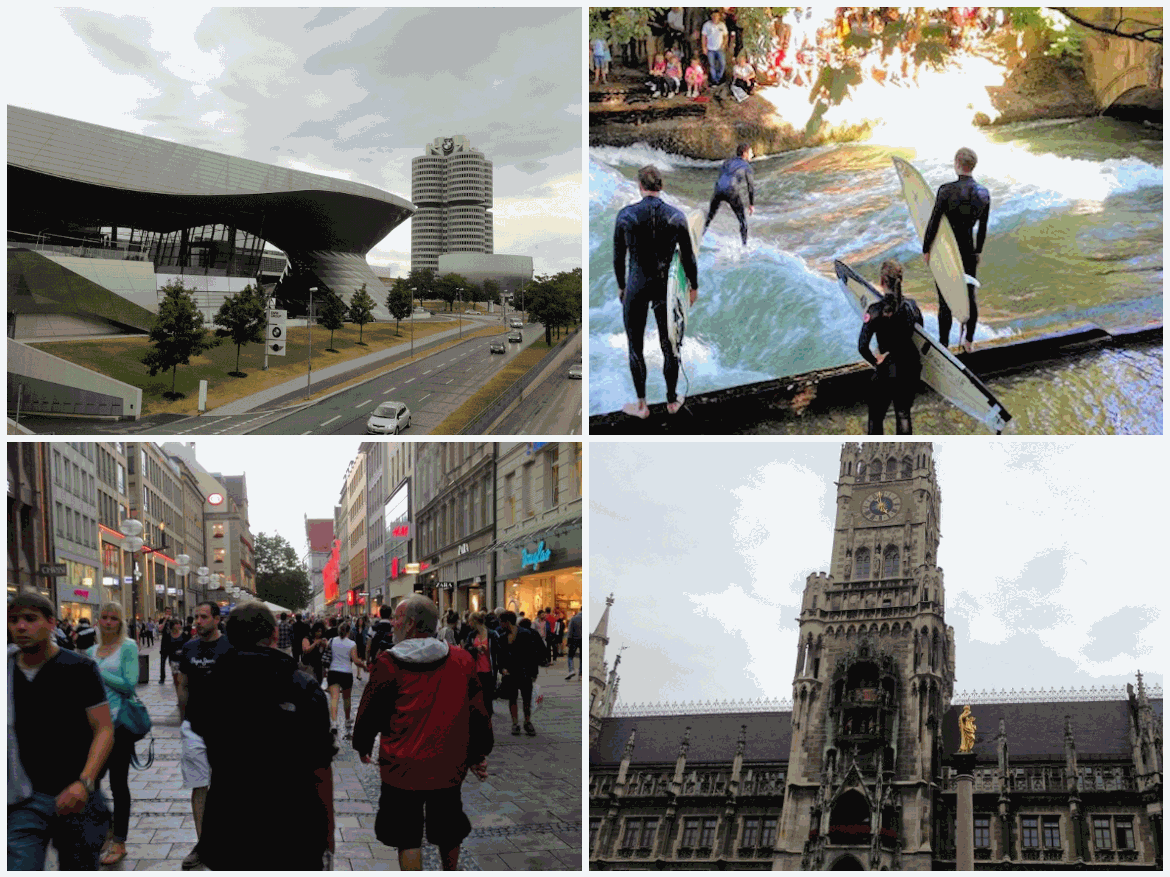 We had visited here in 1996, and I had worked here for Siemens in the late 1980's, but we had not been back for quite a while. We have some very good friends who live here and we wanted to introduce Germany to our teenage son, so staying here for a week was an easy decision.
Munich is the capital and most populous city of the second most populous German federal state of Bavaria, and, with a population of around 1.5 million, it is the third-largest city of Germany after Berlin and Hamburg, as well as the 12th-largest city in the European Union. The city's metropolitan region is home to 6 million people. Straddling the banks of the River Isar (a tributary of the Danube) north of the Bavarian Alps, it is the seat of the Bavarian administrative region of Upper Bavaria, while being the most densely populated municipality in Germany (4,500 people per km²).
If you have never been to Germany, or if you have never had the opportunity to have good German friends, then I would invite you to increase your German knowledge by clicking here to read about German Culture at the "Live Science" website.

If you have never been to Munich & either you are planning a trip there, or you just want to know more about it, here are some good sources of information;

Our drive to Munich took us through Switzerland via the E25/E27 and E60 allowed us to cross into Germany at the southern end of the Bodensee. We drove north on the E60, and then eastward to Munich on the E54.

And this begins the portion of the trip, where Suzette (our Tom-Tom mapping device) really earned her stripes. We had rented a condo, in an area of Munich that would give us easy access to not only the subway, but to bus & tram service as well. This condo unit had underground parking, but we were not familiar with the streets there.

The first issue that arose, is that the Tom-Tom insisted on taking us to Klenzestraße, as though it was a two way street, which it was not. Since we had an excellent Munich street map, we were able to navigate our way around the block, and to drive into the street with the correct driving orientation. Getting back to our place was a constant challenge throughout the week. 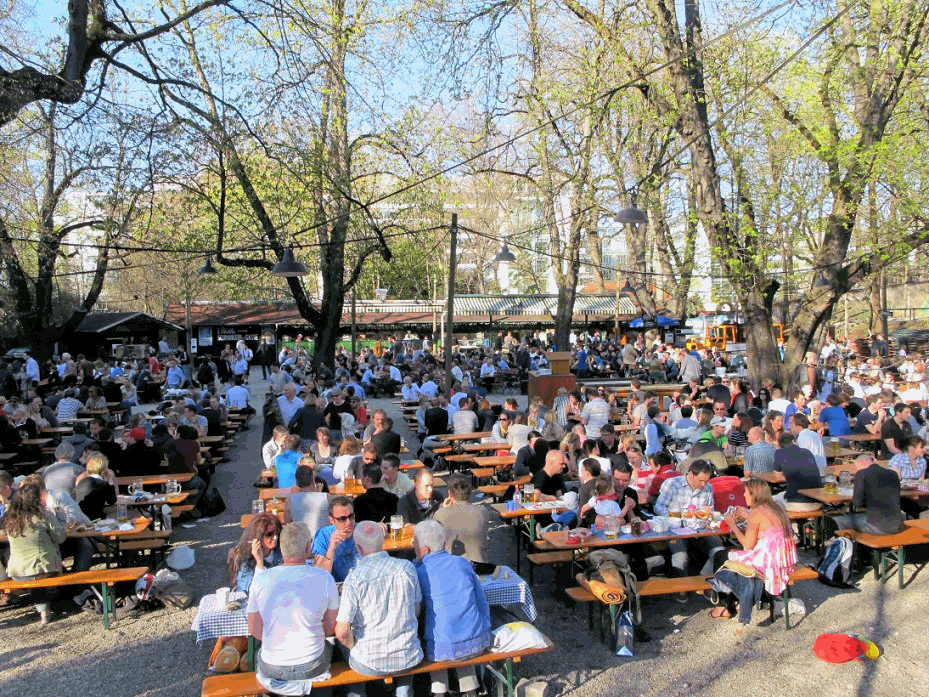 Our first outing, was to the Augustiner Keller (one of the largest & oldest Munich Beer Gardens) for dinner with old friends in Munich. Since it was Jeremy's first trip to a German beer garden, he was fascinated by the people, the food items, especially the HUGE pretzels, and the enormous amount of beer being consumed, etc.
NOTE: This image is the property of BBB via Wiki Media

The next day, was dedicated to another friend in Munich that we worked with in the 1980's. He had started a new Chauffeur Service Company (First Class Chauffeur Service), and offered to take us around the city in his new Volkswagen Phaeton. This was an interesting way to see Munich, and even though I have been there a huge number of times, going around the city with someone who lives there and knows how to drive there, is a treat! 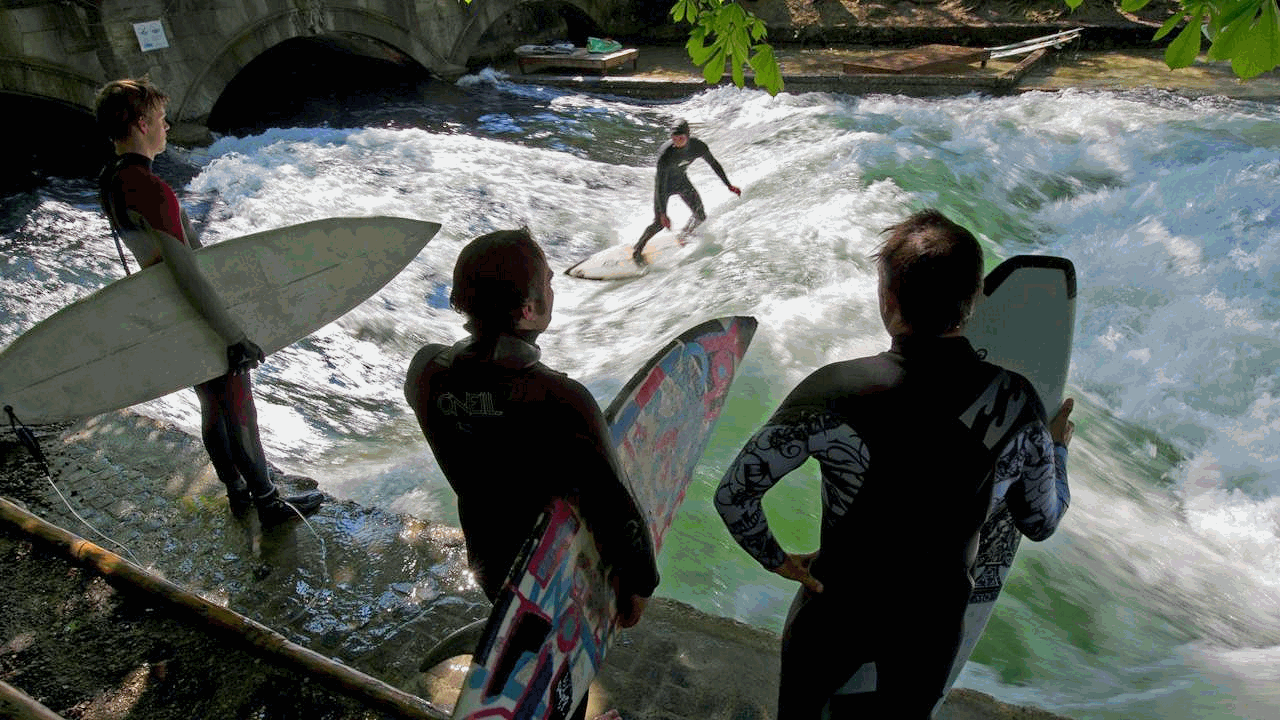 Our German friend started the tour, by taking us by the world famous Eisbach River surfing spot. Many years ago as Munich grew, the old river channel was forced into an underground tunnel, which allowed the city of Munich to "grow" over the tunnel. And this produces a river outlet spot with considerable water pressure, as shown in this picture.
The surfers line up on the bank, and step in as the previous surfer steps out, or falls off. It is truly amazing to watch, as these guys are seriously good surfers and they put on a great show! This is not a spot for surfers who are not extremely experienced, because one does not paddle to catch a wave, you jump on your board and the wave propels you immediately!
If you want to see some interesting videos of people surfing the Eisbach, search for it on YouTube, or view an existing video here. 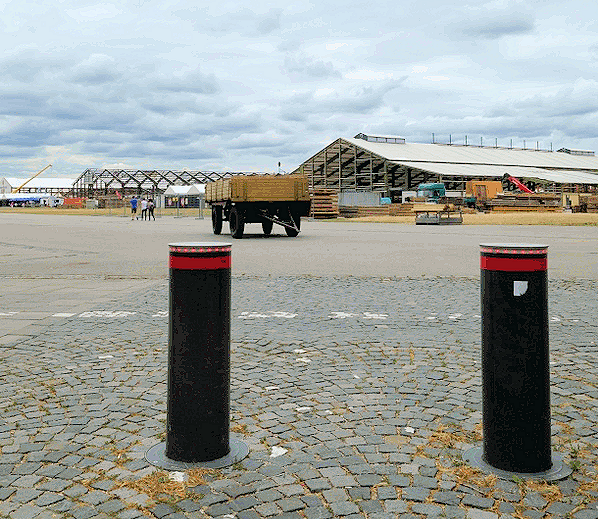 The next stop was at the Oktoberfest grounds, where workers were busy constructing the festival tents that will house each "tent". Back in the day, each tent represented a Munich Brewery, however this is no longer the case. Nonetheless, each tent will offer food, beer and ompah bands to sing along with! And just for the people who do not like beer, there is usually a "wine tent" as well. 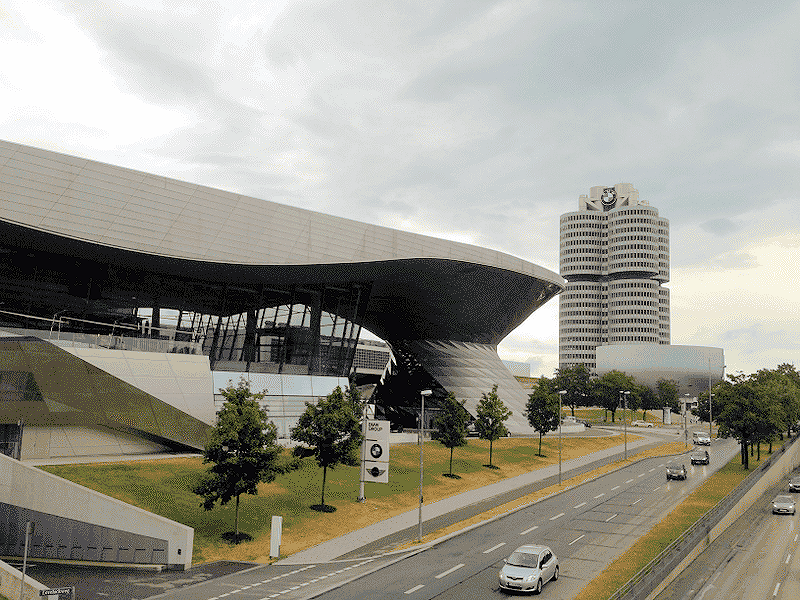 Our next stop, was the BMW museum, next to the 1972 Olympic Center area. This is a fascinating museum, and it contains a number of BMW cars (including the Mini Cooper) and motorcycles.
That building on the left is the BMW museum, and the building on the right, is the BMW headquarters building.
It is simple to travel to the BMW Museum, for example from Marienplatz take the U3 subway. Taxi and/or uBer is a brief ride, or you could easily walk as it is only 3.4 miles. No matter how you arrive, the museum is an interesting visit, and then the Olympic Park is right next door. 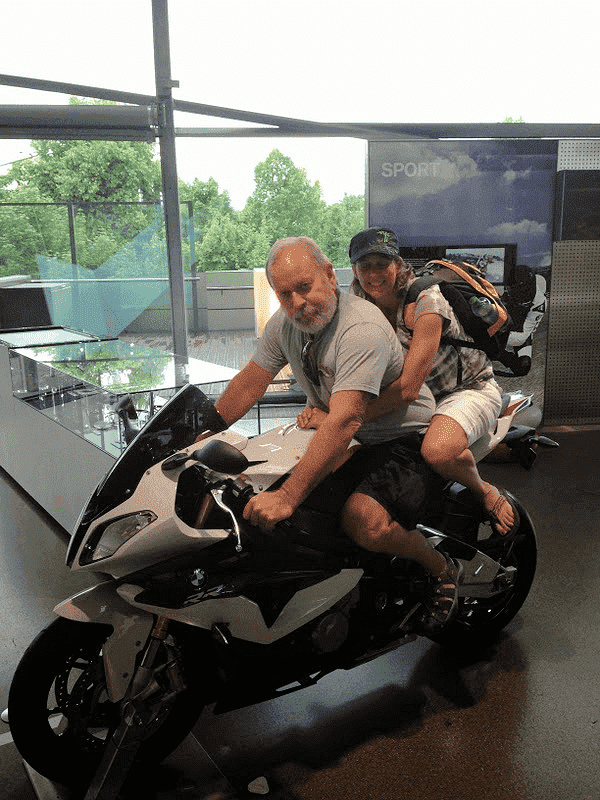 This is the BMW K-1300-S (found in the BMW Museum) which I initially thought was going to be my next motorcycle. Instead, I wound up with a Harley-Davidson VROD (another story). This BMW has tremendous power and gets amazing reviews, so only time will tell if I made the right choice.
As you can see, Celeste and I were trying out the "riding comfort" of the BMW. 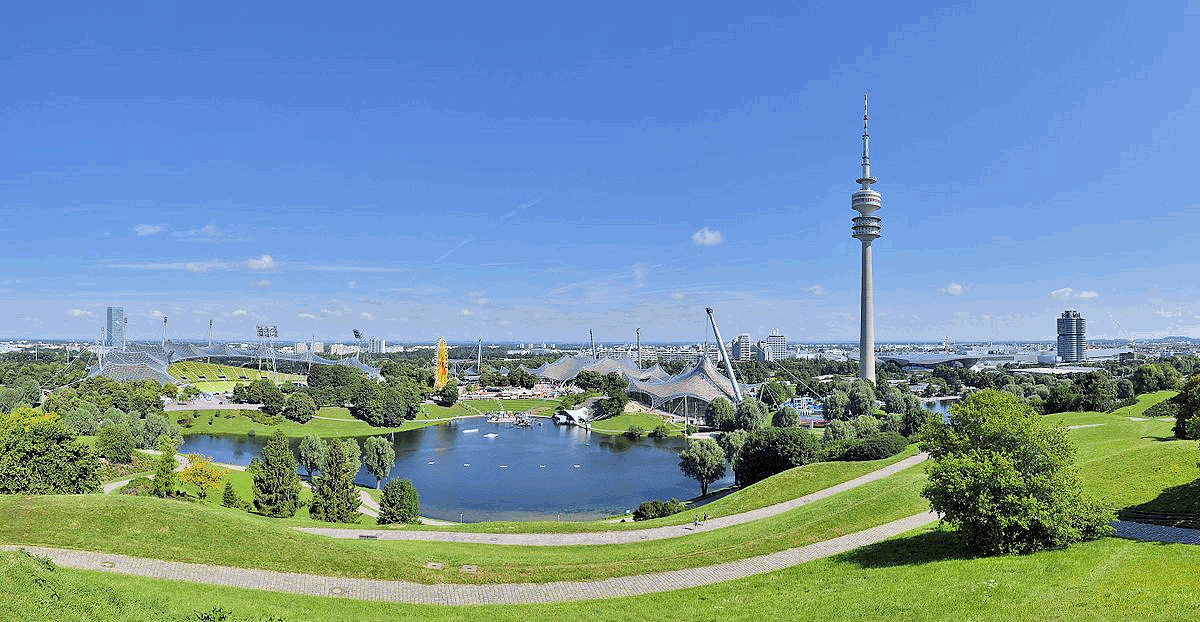 After our BMW museum tour, we walked across the autobahn on the pedestrian walkway to the Olympic Park. We rode up to the top of the Olympic Tower (right center of picture) so that we could show Jeremy the amazing view of Munich from that height.
You can see the BMW Headquarters building in the right side of this picture, gives you a good idea of the proximity of the Olympic Center to the BMW complex. Not a huge walk, Google Maps indicates approximately 500 meters if you use the footbridge across the Georg-Brauchle-Ring freeway.
NOTE: This image is the property of Taxiarchos228 via WikiMedia Commons 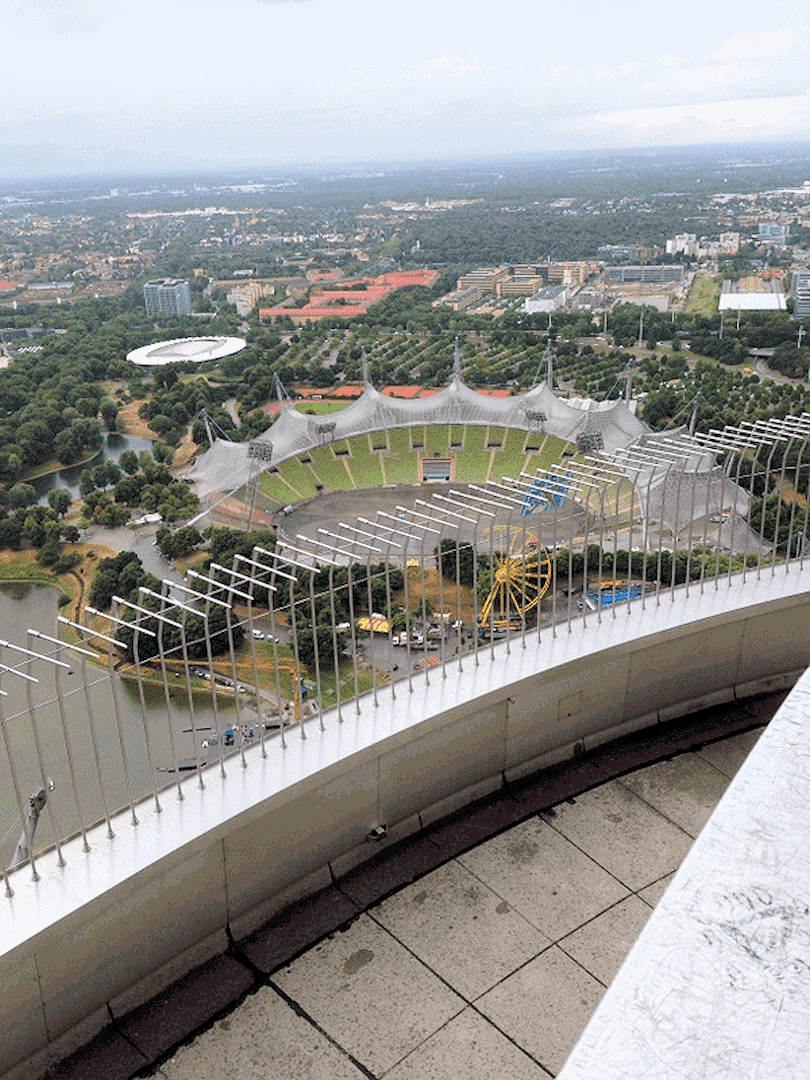 As seen from the top of the tower. For those of you who watched the World Cup Final, this stadium was completely full of soccer fans, watching the final on several jumbo-tron monitors erected for the fans to watch the finals. 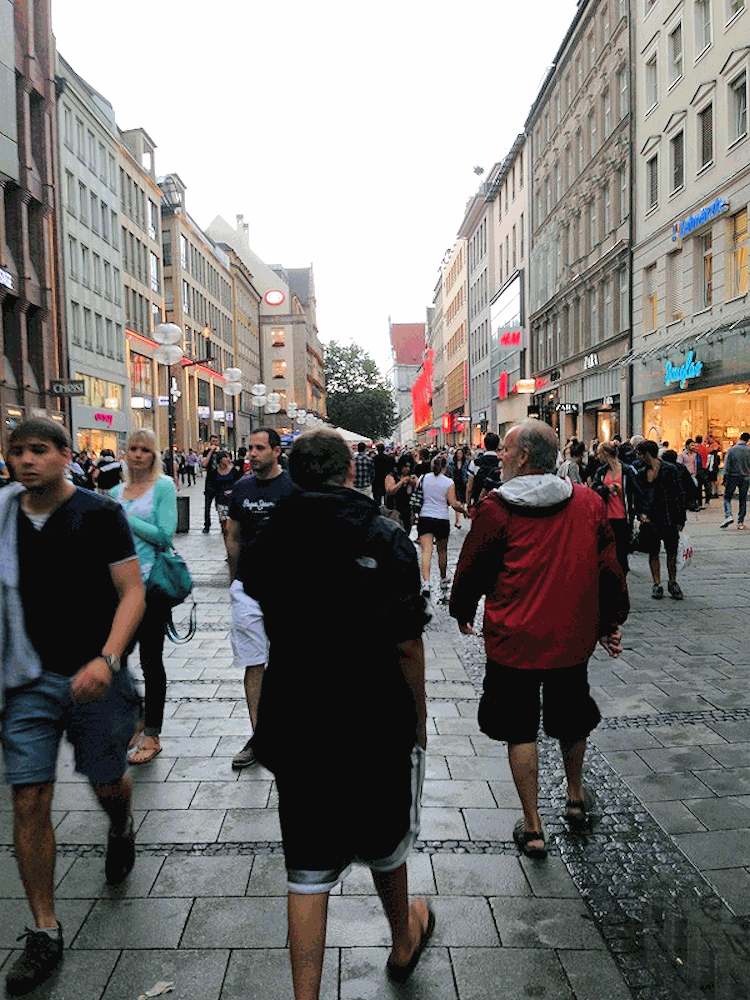 Metro back to Marienplatz

We walked back to the Olympia-zentrum U-Bahn Station and rode the U3 back to Marienplatz Station. This is a large 4 level station, where the S-Bahn (S1, S2, S3, S4, S6, S7 and S8) lines intersect with the U-Bahn (U3 and U6).
We exited the station and strolled through Marienplatz (pedestrian area) to watch the glockenspiel march when the hour ticked over.
Not sure that you can tell from this picture, that it had just stopped raining. Which, given the heat wave that was still over Europe, cooled things off nicely.
Strolling along in Marienplatz in central Munich, and you can see how crowded it is? This is typical for a summer day.
We were looking for a place to purchase an afternoon snack and an iced coffee - and fortunately for us, we found one quickly. 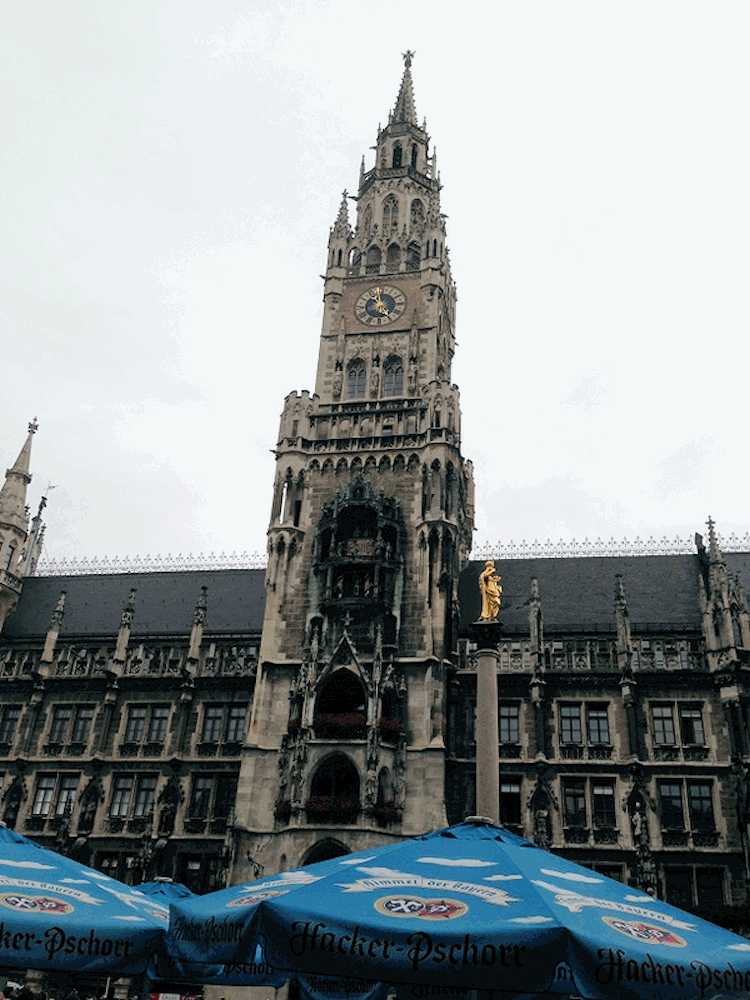 Every day at 11 a.m. and 12 p.m. ( as well as 5 p.m. in the summer) it chimes and re-enacts two stories from the 16th century to the amusement of mass crowds of tourists and locals. It consists of 43 bells and 32 life-sized figures. The top half of the Glockenspiel tells the story of the marriage of the local Duke Wilhelm V (who also founded the world famous Hofbräuhaus) to Renata of Lorraine. In honour of the happy couple there is a joust with life-sized knights on horseback representing Bavaria (in white and blue) and Lothringen (in red and white). 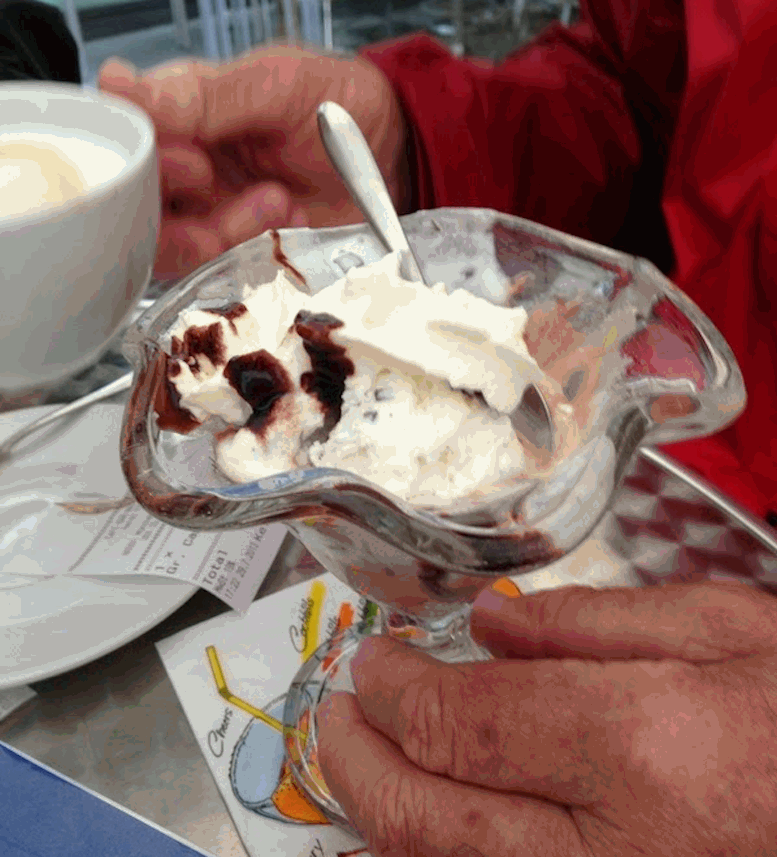 We were "forced" to find various ways to deal with the heat, and discovered that ice cream worked very well to reduce the heat effects !
We found a great little ice cream shop, in an alley that led to a shopping area, just off Marienplatz (sorry we did not record the name of this shop). As we needed some afternoon "motivation", the ice cream was accompanied by a cappuccino and we were ready to keep on walking! 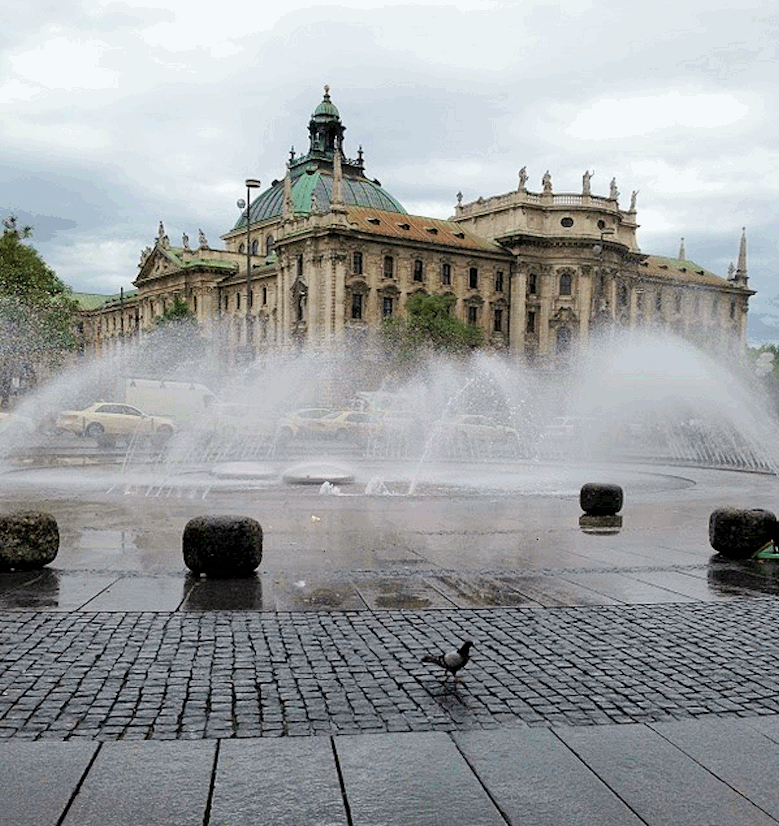 We walked to the far western end of Marienplatz to Karlsplatz to catch the bus there, and the fountains there always attract a crowd. Of course, some of the crowd here is because Karlsplatz is a major transportation intersection point; buses, tram cars and the subway all converge here.
For those of you familiar with Munich, this is a nice stroll through the center of the city, lined with shops, restaurants and other types of stores. In fact, there is a large shopping center underneath Karlsplatz. 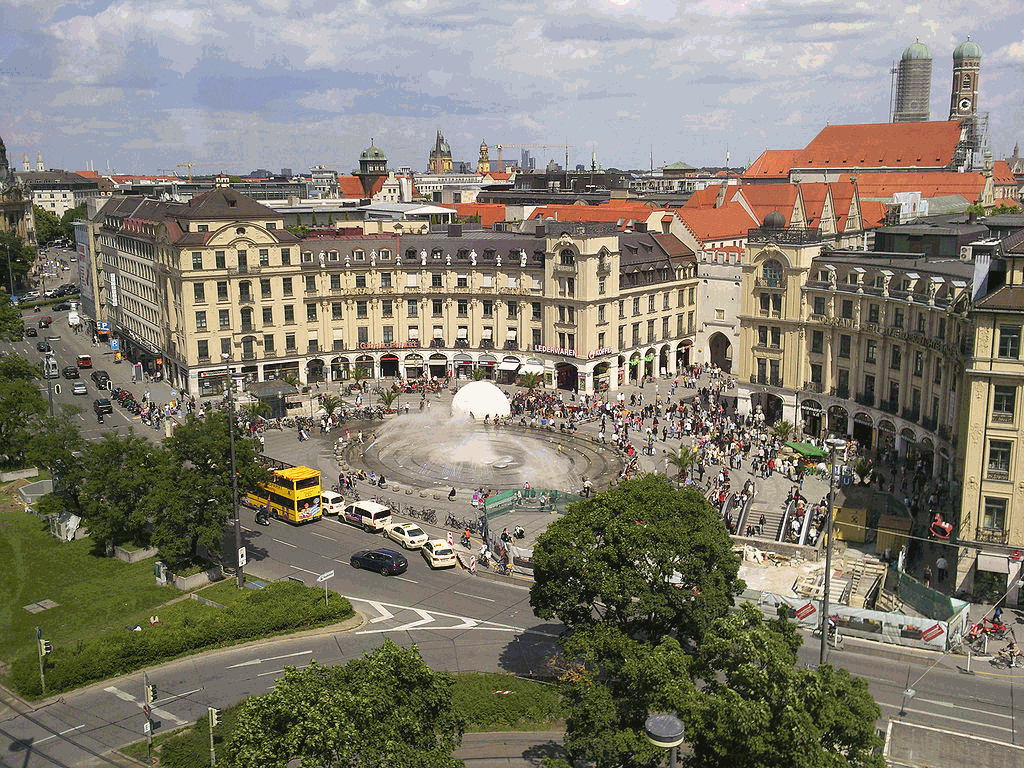 A view of Karlsplatz

This is a great picture of Karlsplatz from the western side of the square, you can see the fountains and bus stops. You might not be able to see the U-Bahn sign (to the right of the stairs in the lower right corner of the picture) but the station is just below the square.
NOTE: This image is the property of Robb via Wikipedia 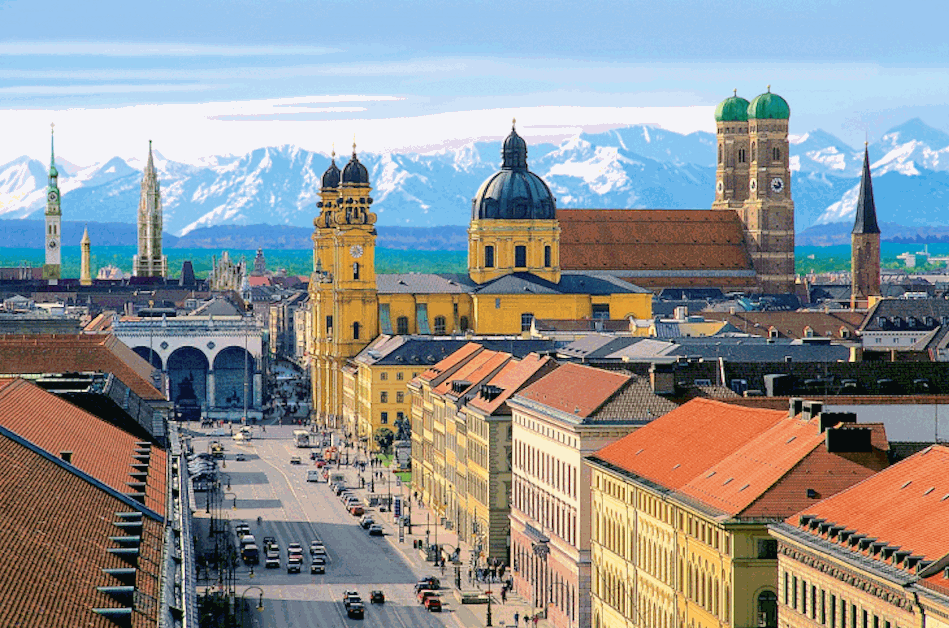 The twin spires chuch above is the "Frauenkirche" which is a church that serves as the cathedral of the Archdiocese of Munich and Freising and seat of its Archbishop. More importantly, in the background are the Bavarian Alps. Beautiful isn't it?
NOTE: This image is the property of etour.ua

To view our entire set of images from Munich Germany, click here

To review any of our content, make suggestions and/or comments, please use the "Contact Us" link in the 'Categories' drop down menu at the top of this page.