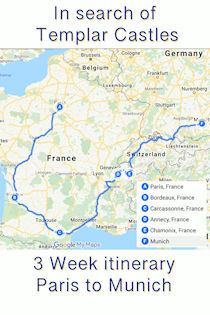 Our game plan was to drive to Salzburg from Munich, 159 kilometers on the A94 Autobahn and we were looking forward to being able to drive at autobahn speeds most of the way (speed limits are in effect near various cities). Unfortunately, there was some disturbance on the autobahn that backed up traffic for miles and so our autobahn trip turned into a 20 mph "average speed" with frequent pauses.

Some Interesting Facts about Salzburg

Salt Mine Dürrnberg near Salzburg 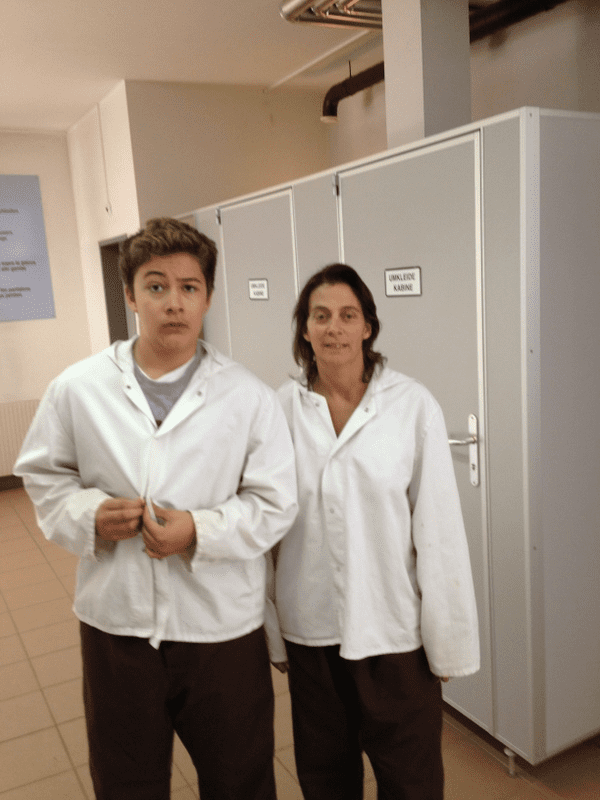 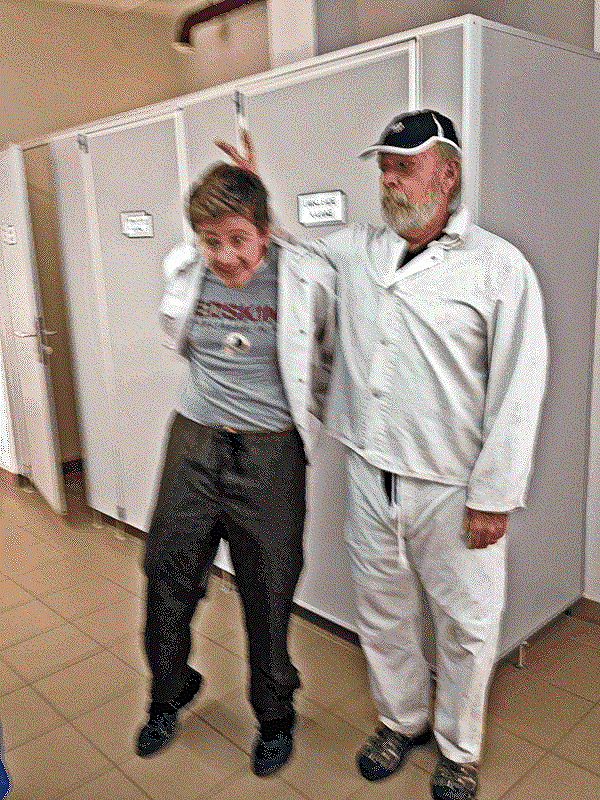 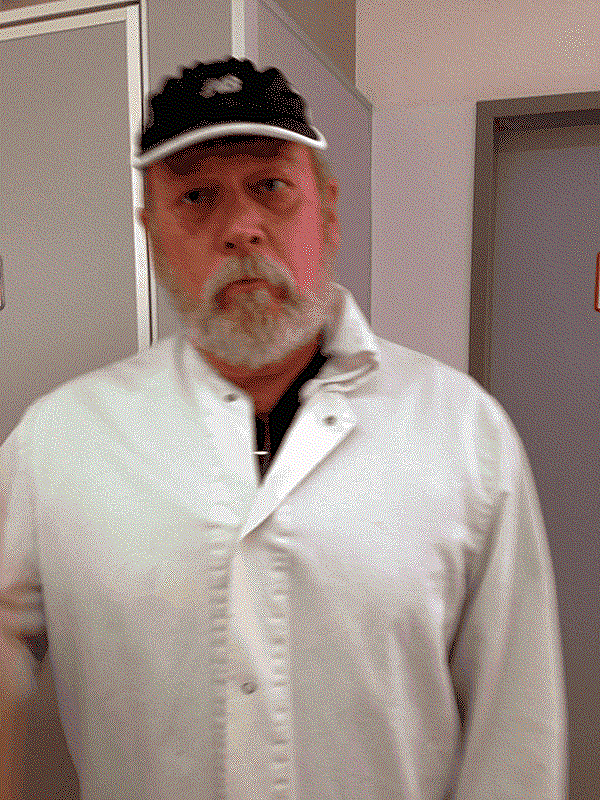 The Salt Mine Dürrnberg is located only a few miles south of Salzburg, and on the western side of the River Salzach, high on a hill overlooking the river and just beyond the village of Hallein. To enter you are required to purchase tickets, and wear coveralls, in order to protect you from all the salt and salt water found inside the salt mine.

Once everyone was suited up, we all walked to the mine entrance, and got onto a very small train, which then takes us into the mine. 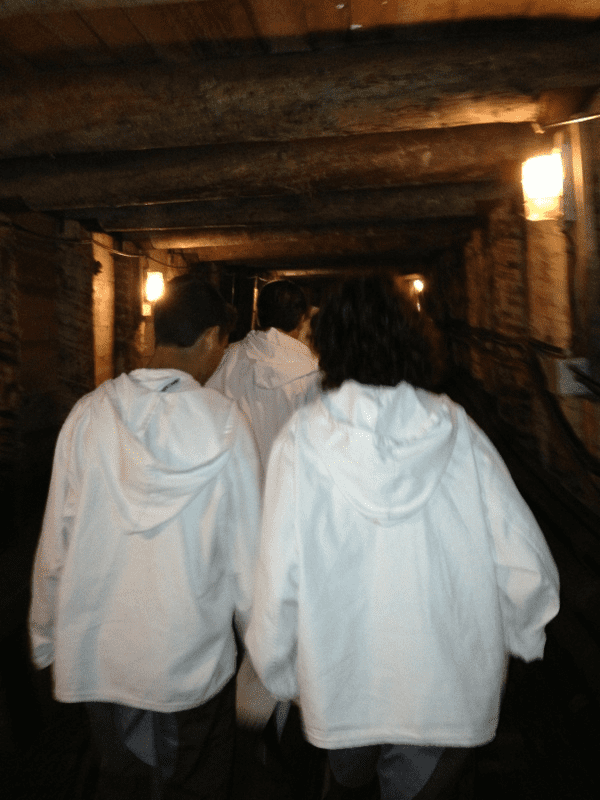 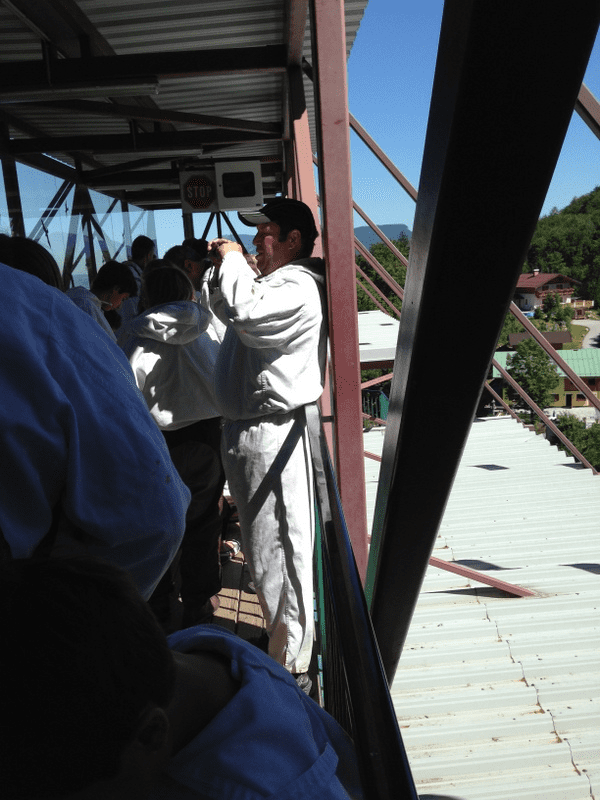 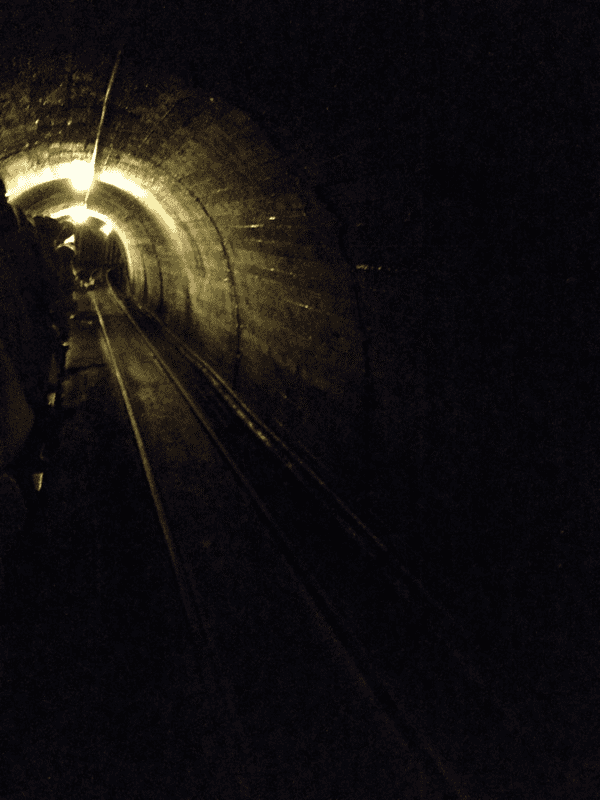 After the mini train reaches as far as it can go, everyone dismounts and the walking tour of the mine commences. At one point, we actually crossed back into Germany, giving you an idea of how large this mine is.

As the mine is comprised of multiple levels, the access from level to level is via long wooden slides, which are polished to a high shine due to the incredible number of coverall wearing visitors who have slid down them!

Rolling along on the mini-train, headed to where the salt mine walking tour started. It was probably not quite a kilometer or two inside the mountain, but it was a rather fun way to cover that distance!

Mining is no longer performed there, as they have discovered that using water to percolate through the salt, produces a very briny fluid which is then left to dry, to produce high quality salt.

After our tour concluded, we drove back to Salzburg to visit the Hohensalzburg Festung, which sits high on a hill above the city. Salzburg is split down the middle by the River Salzach, with the "old city" on the side of the river nearest the Festung, and the "new city" on the other side. Wolfgang Amadeus Mozart was born in Salzburg in the 18th century, and the movie "Sound of Music" was filmed in and around this city.

Parking in Salzburg during tourist season is always a challenge, but we found the CONTIPARK Tiefgarage Mirabell-Congress-Garage underground parking lot near the Mirabell Palace. We had to walk through the palace grounds on our way to the "old city" on the western side of the Salzach River, which was only a few kilometers away.
NOTE: Image is the property of Thisisbossi via Wikipedia Commons. 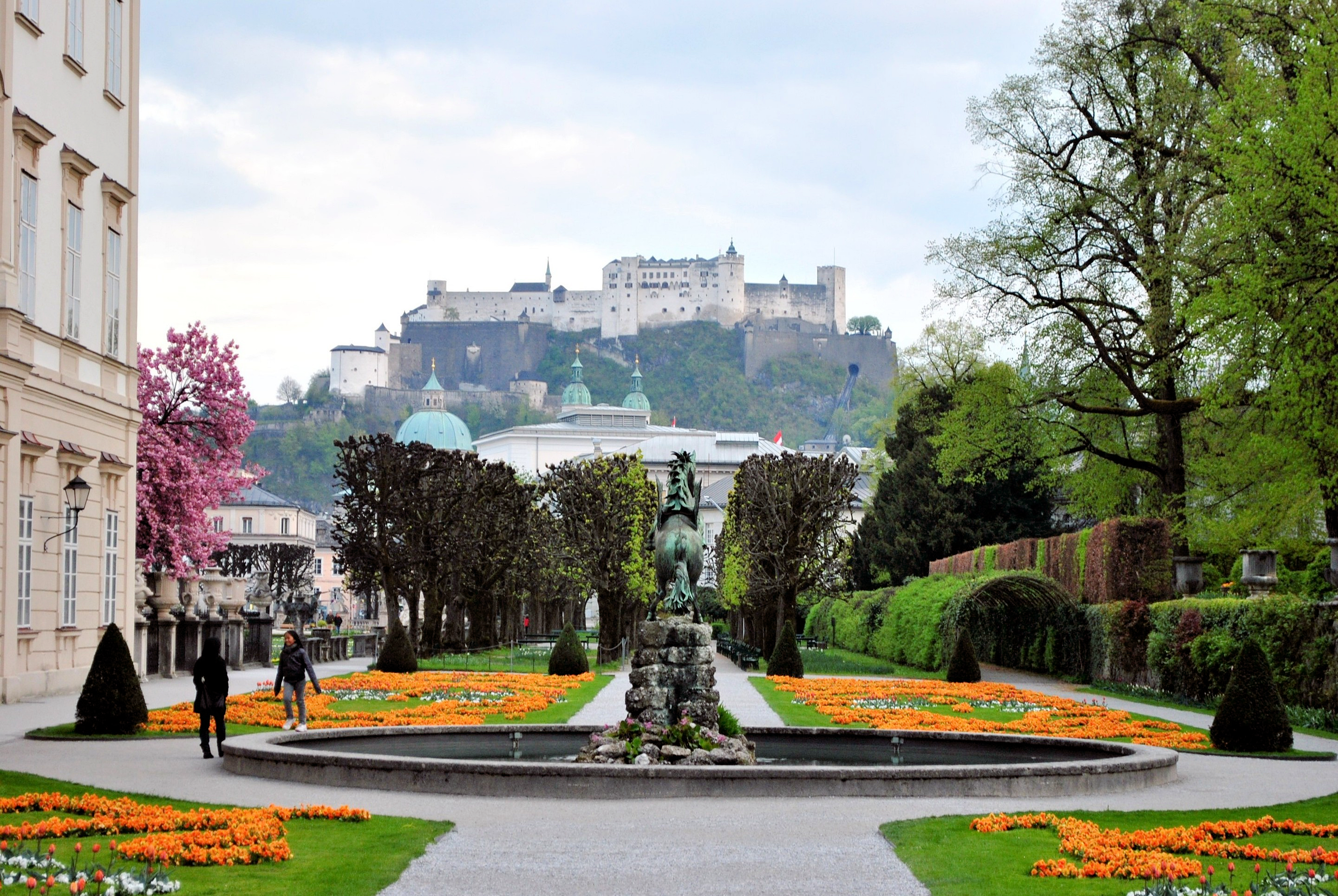 Mirabell Palace with the Festung in the Distance

There is our goal, all we have to do is walk through the Palace grounds, cross over the Salzach River on the Karolinen Brücke and wind our way through Old Town. 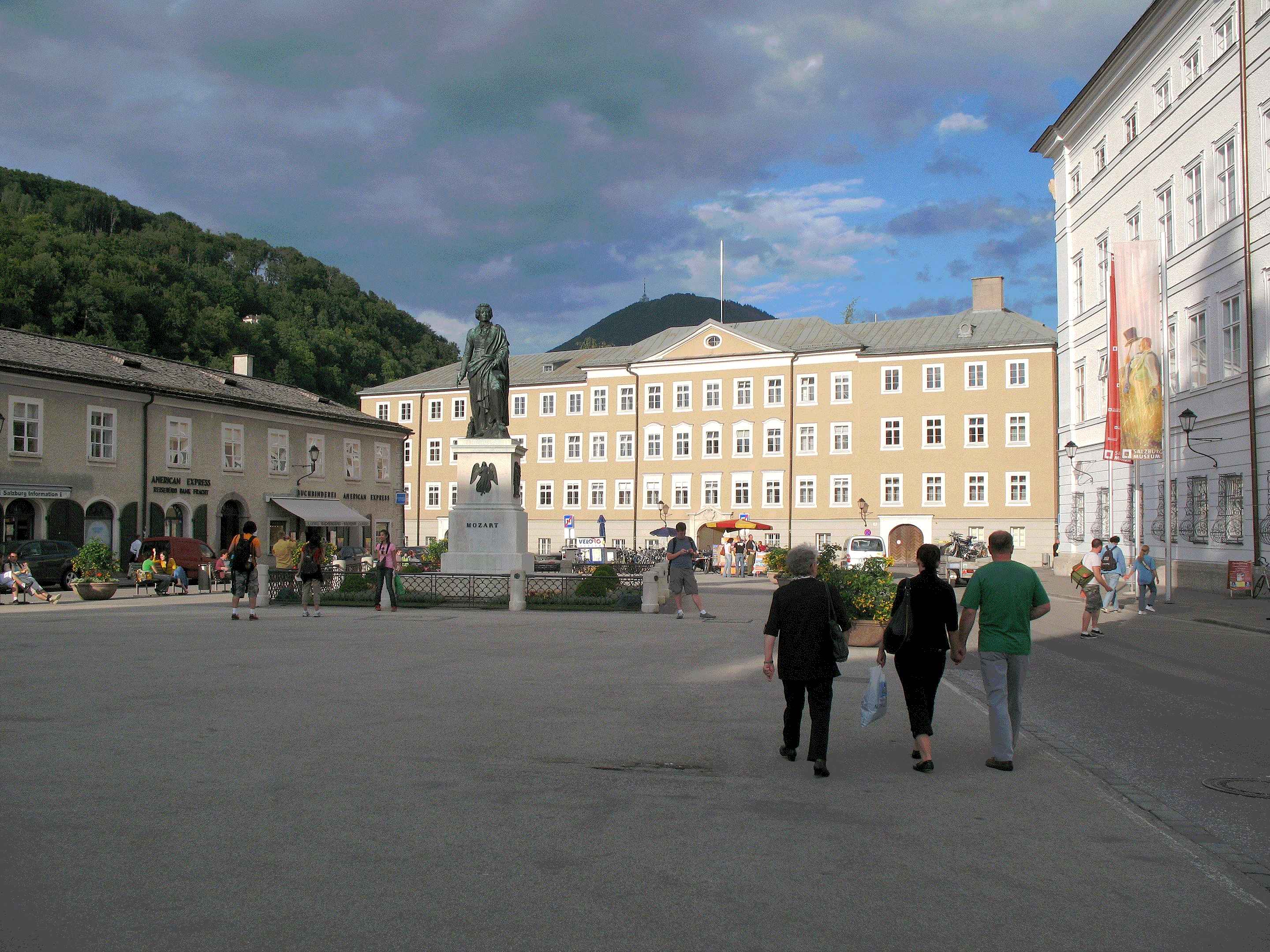 The Mozartplatz is a rectangular square in the Altstadt (the "old town" of Salzburg), which was created by the demolition of various town houses under Wolf Dietrich von Raitenau in 1588.

If you are walking from the Karolinen to the Festung, you will most likely walk through or past this area. The Festungsgasse will bring you past the plaza to the Festung entrance in about 10 minutes of walking. 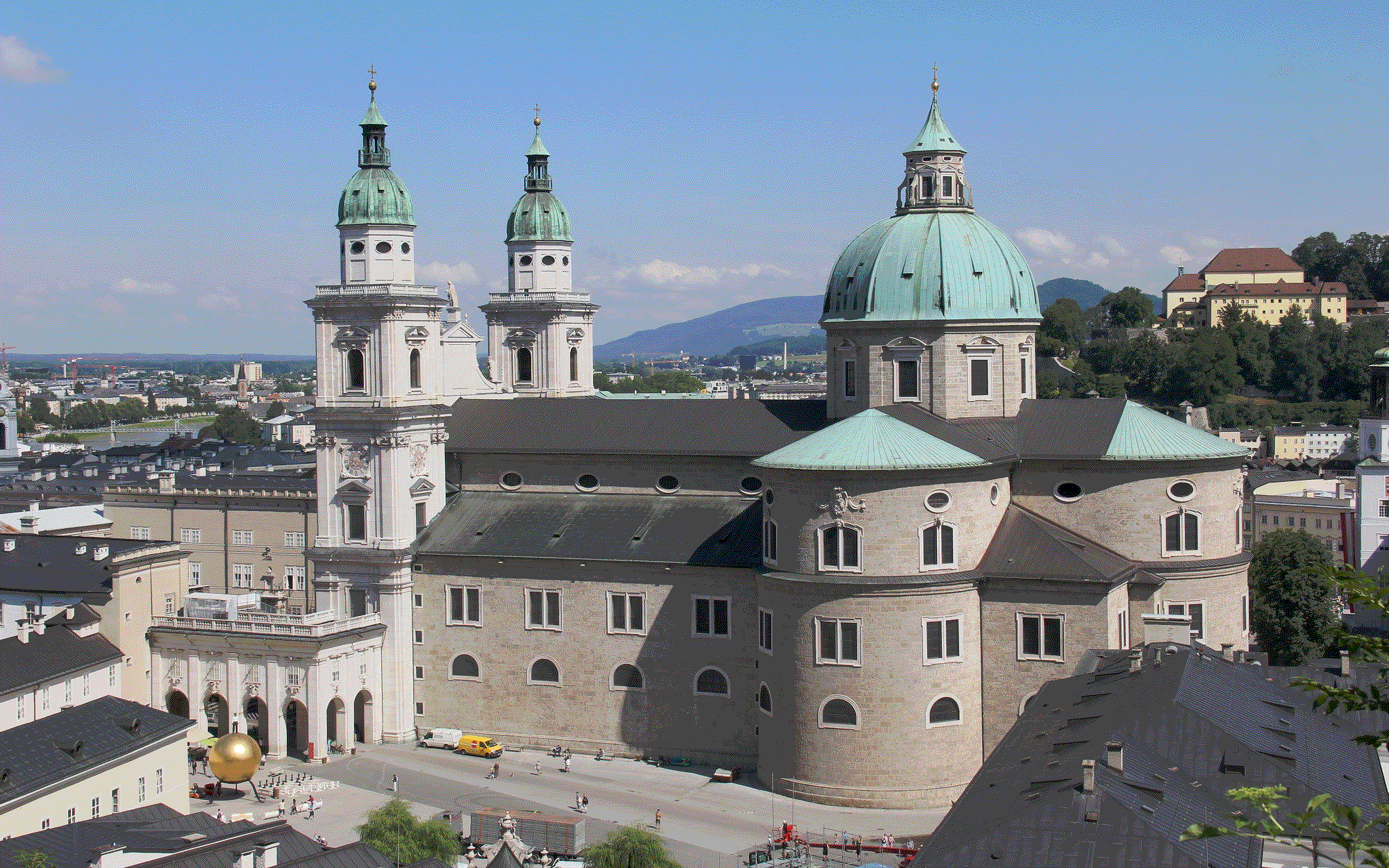 If you are walking along the Festungsgasse, you are going to walk past the southern side of the Cathedral. This seventeenth-century Baroque cathedral is dedicated to Saint Rupert and Saint Vergilius. Saint Rupert founded the church in 774 on the remnants of a Roman town, the cathedral was rebuilt in 1181 after a fire. In the seventeenth century, the cathedral was completely rebuilt in the Baroque style under Prince-Bishop Wolf Dietrich von Raitenau to its present appearance. Salzburg Cathedral still contains the baptismal font in which composer Wolfgang Amadeus Mozart was baptized.
NOTE: Image is the property of Mattis via Wikimedia Commons. 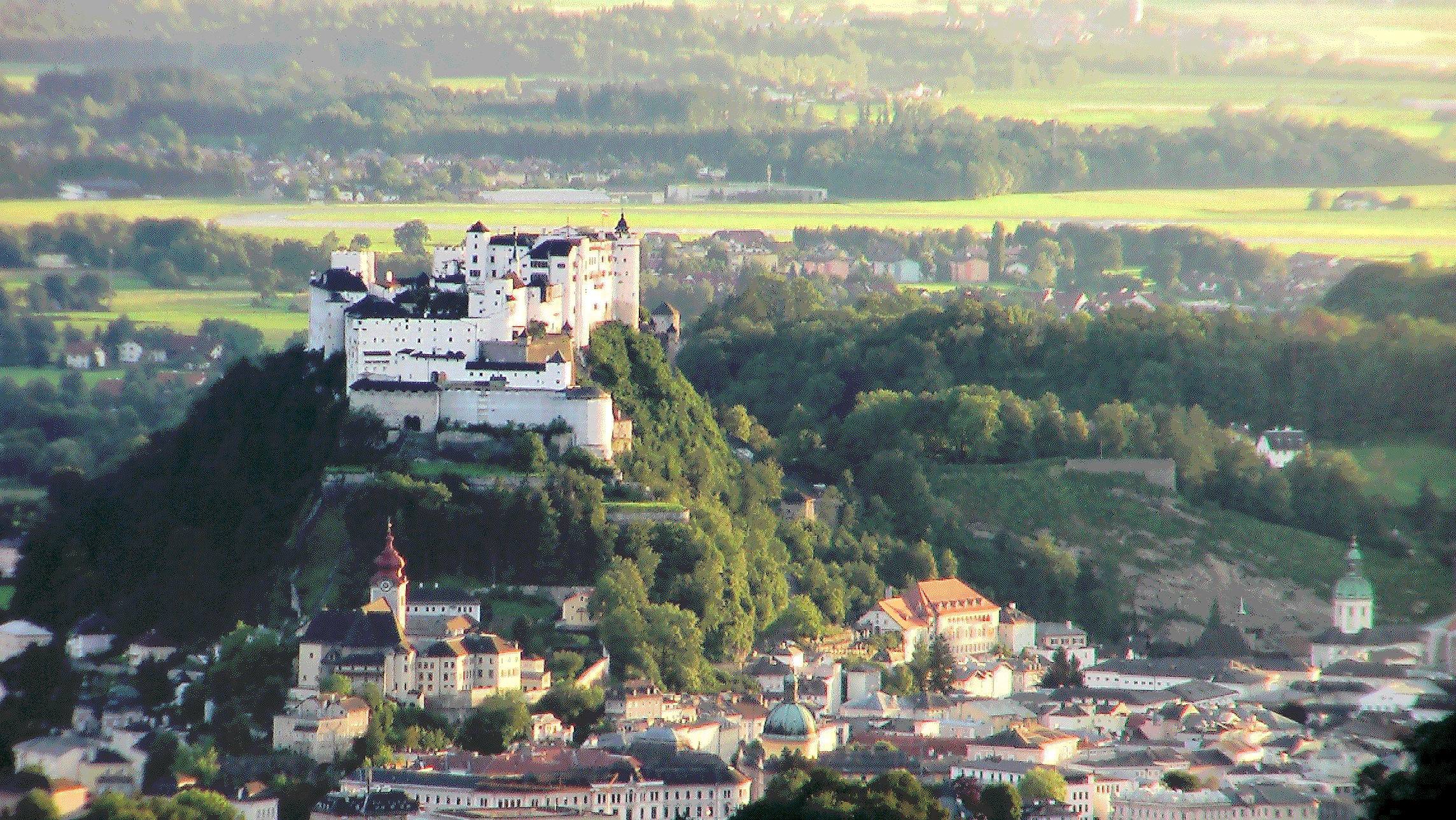 This is the Festung Hohensalzburg, a magnificent example of a fortress originally built by a Catholic Archbishop starting in 1077. This view of the Fortress is from the eastern side, and you can see "old Salzburg" at the foot of the Festung's mountain. It might not be easy to discern, but this Festung is one of the largest medieval castles in Europe.
NOTE: Image is the property of Joergsam via Wikimedia Commons.
NOTE:  Click here to view a map.
Click here to view a very good YouTube Video of the Festung. Please note that this video is the property of RIHA Film and we thank them for such a beautiful video. 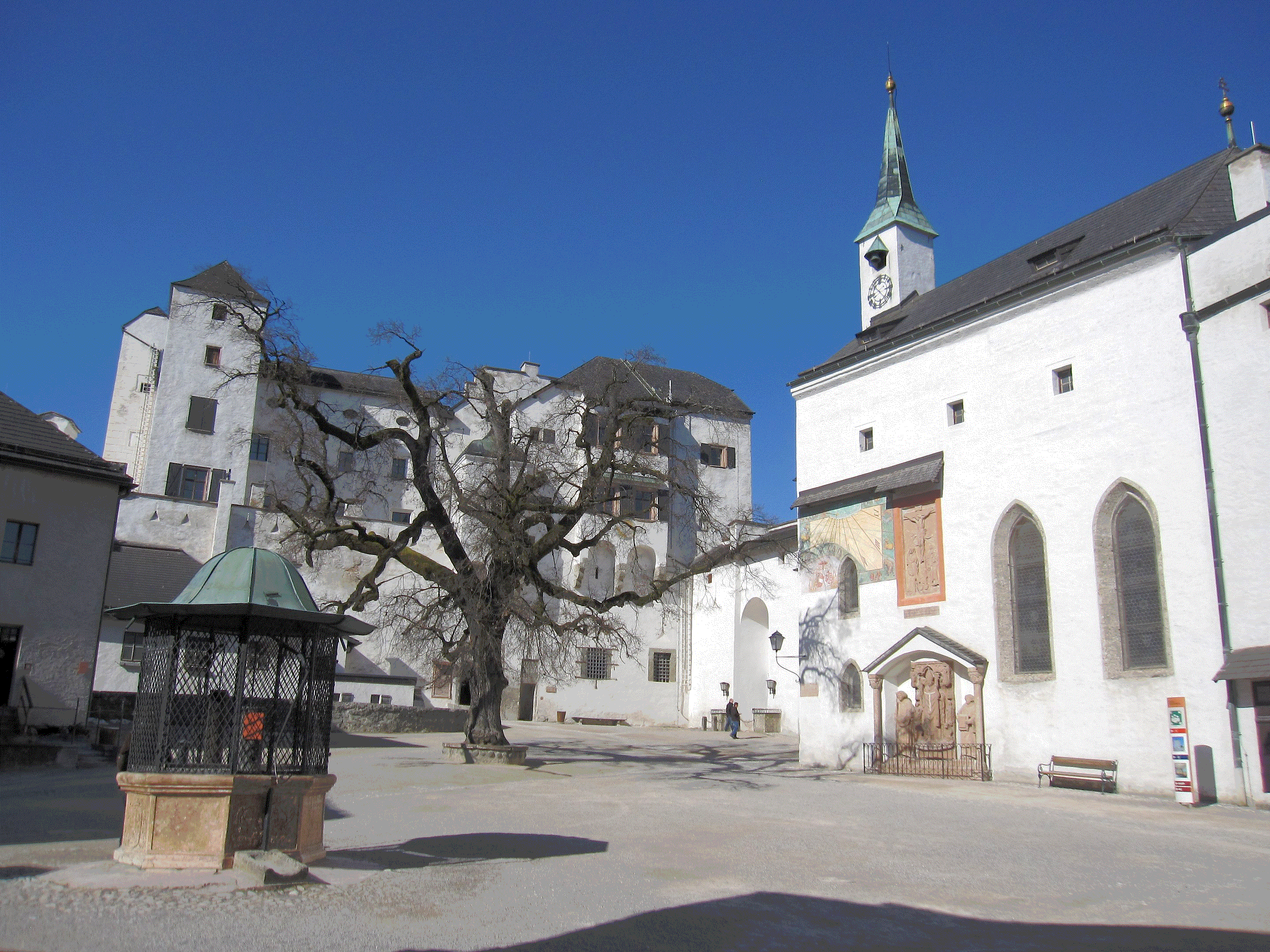 The fortress consists of various wings and a large courtyard. The Prince-Bishop's apartments are located in the so-called "Hoher Stock" (high floor). 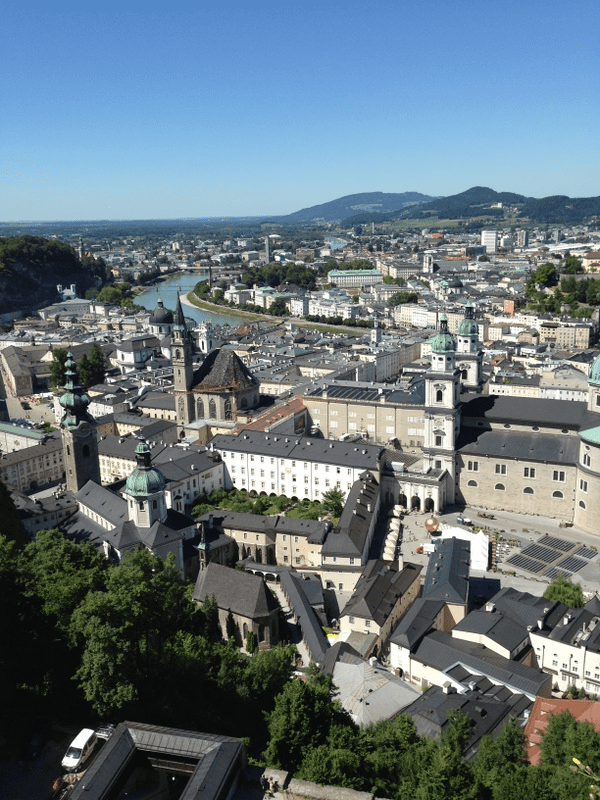 View of Salzburg from the Festung

This is the view from the highest point in the Festung looking east, with the old city below. Gives you some idea of the height of the Festung doesn't it? Google says that the Festung altitude is 506 meters (1,660 feet) and the average elevation of Salzburg is 1,390 feet above sea level.

The church in the center of this image is the Salzburg Cathedral, a seventeenth-century Baroque cathedral of the Roman Catholic Archdiocese of Salzburg.

The River Salzach looks like it is quite far away, but in reality it is only perhaps 1/2 mile away. 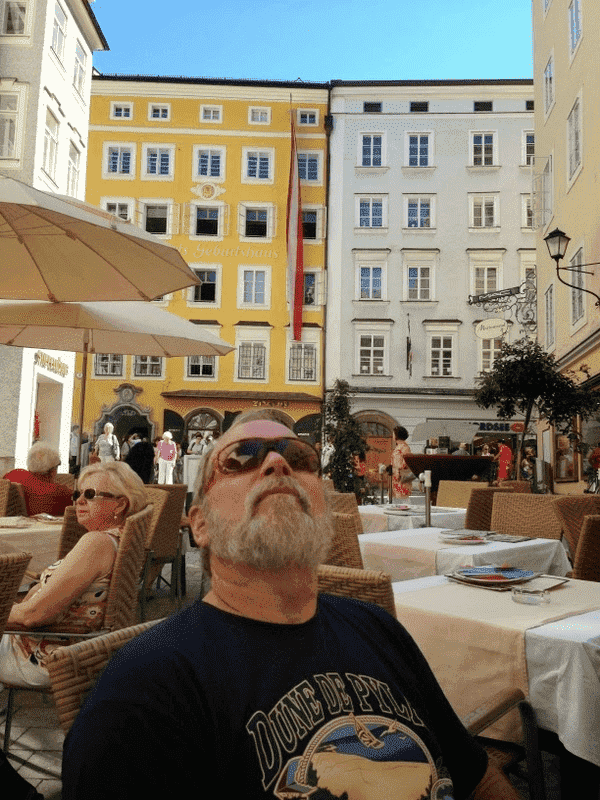 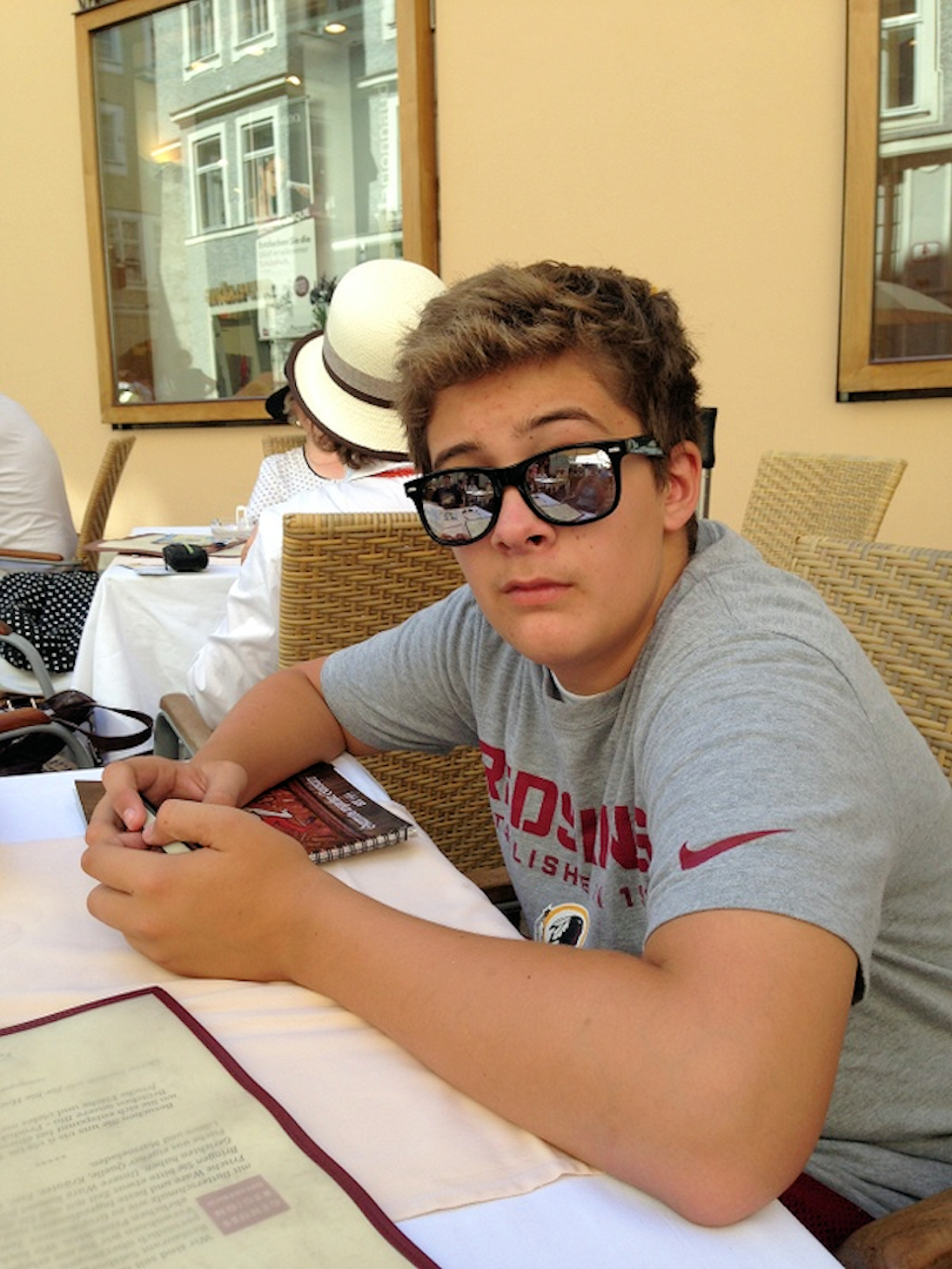 Image # 1: After walking around the Festung, as well as old Salzburg, and since the European heat wave was still in effect, we found an outdoor cafe and had some cold drinks before going back to pick up our Renault, to head back to Munich.

This was at the Café Glockenspiel very near the Mozartplatz, outdoor seating with umbrellas. Click here for their website.

Image # 2: Can there possibly be anything as refreshing as an iced coffee on a hot day?

On 8 August 2013 Temperatures in Austria exceeded 40 degrees Celsius (104 degrees fahrenheit) for the first time since temperature records were recorded. Click here to read a Washington Post article about the heat wave in 2013. 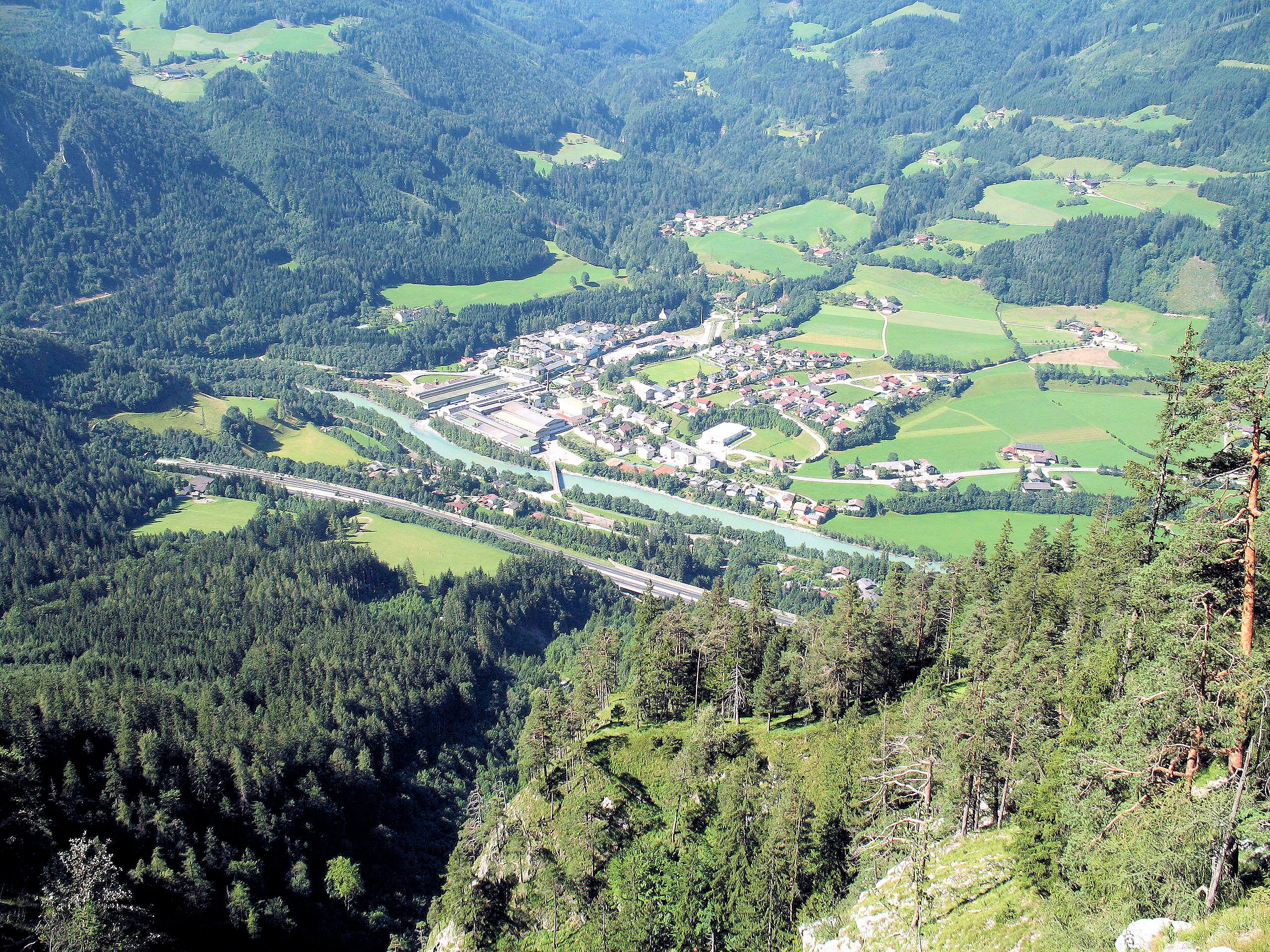 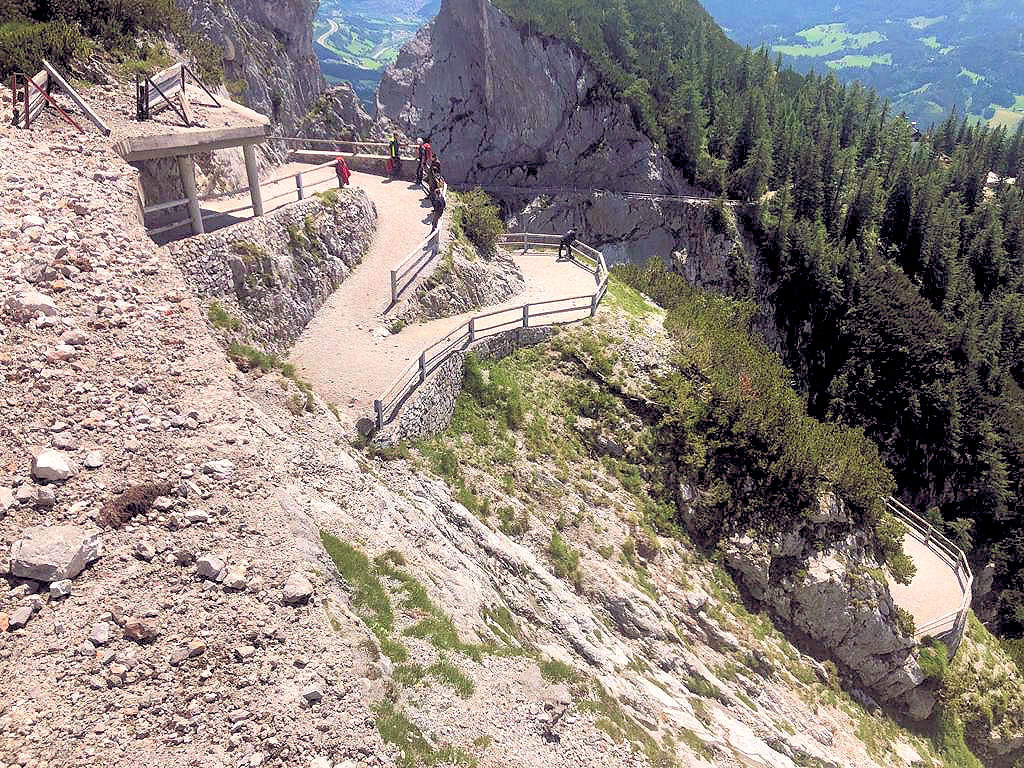 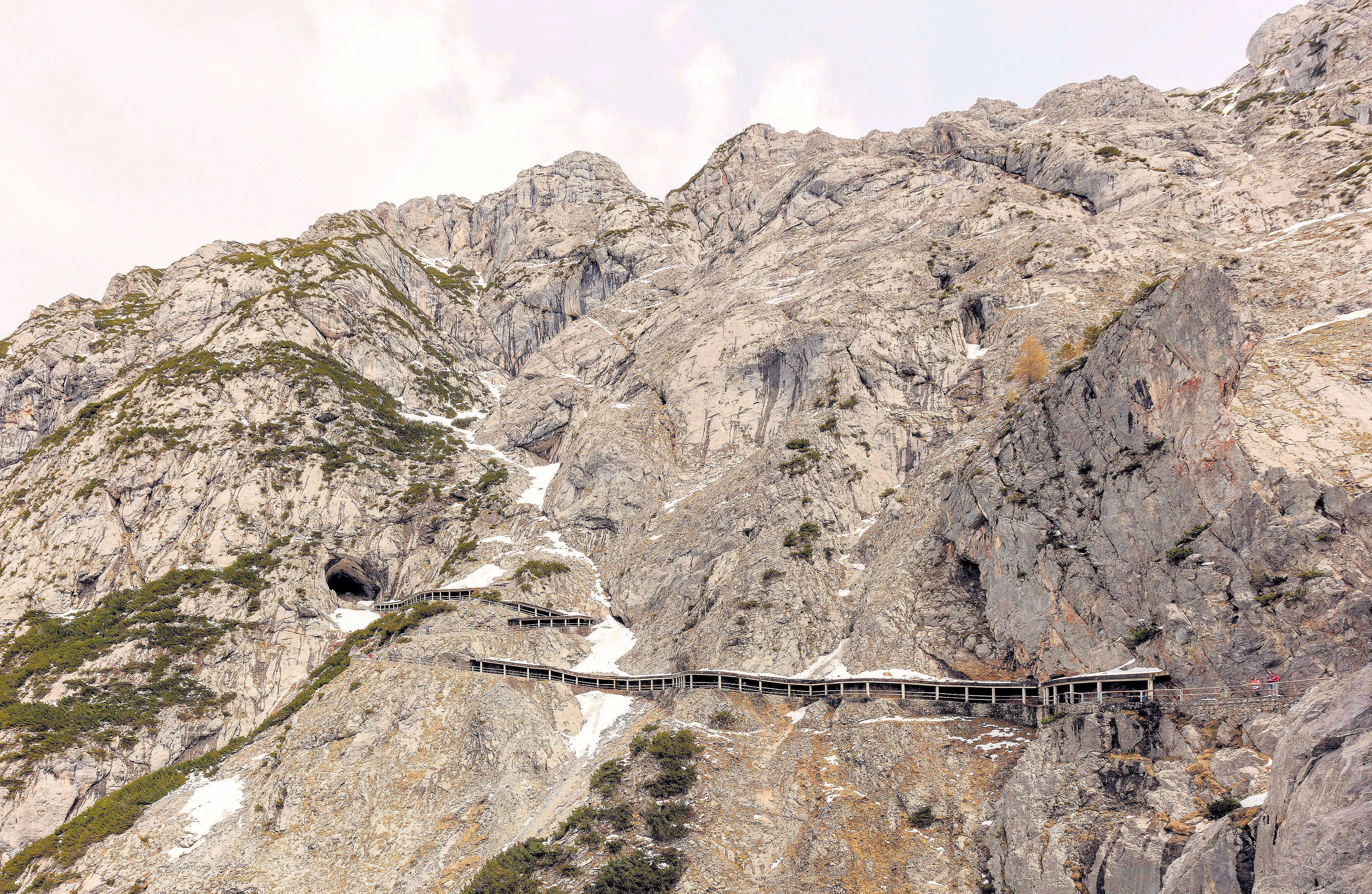 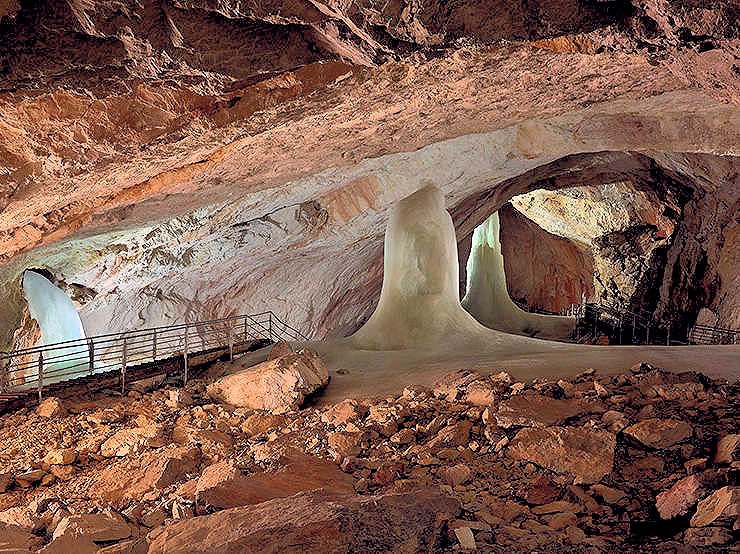 Located on the western side of the Austrian A-10 (51.2 kilometers) south of Salzburg, are the Eisreisenwelt Ice Caves. Discovered in 1897 and for 35 years, the cave was only reachable by foot. A cable car was constructed in 1955 for the steepest part of the trail (from 1,086 meters to 1,586 meters). In 2015 a new cable car system was installed. 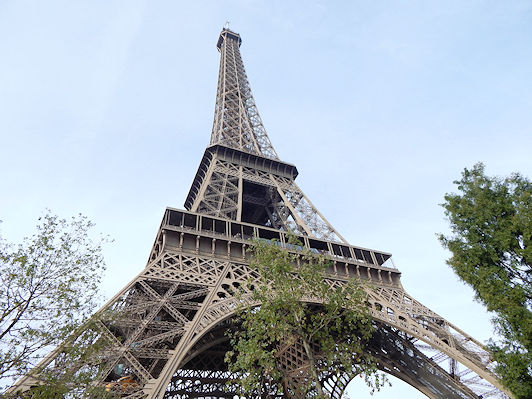 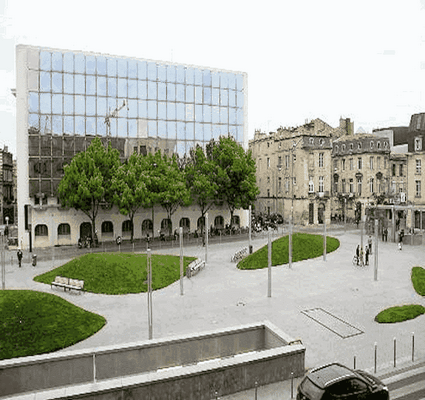 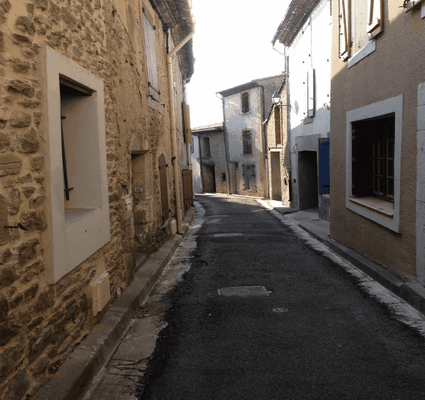 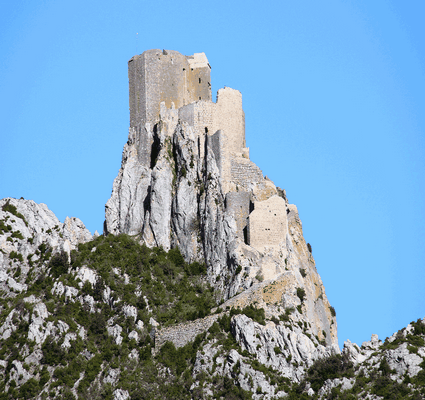 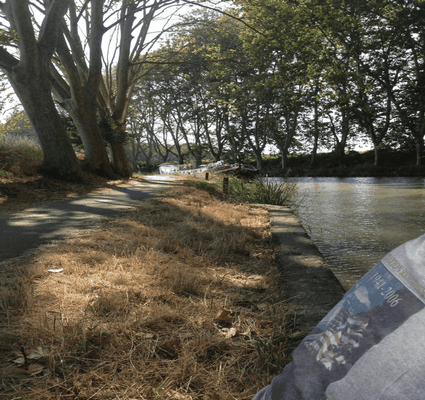 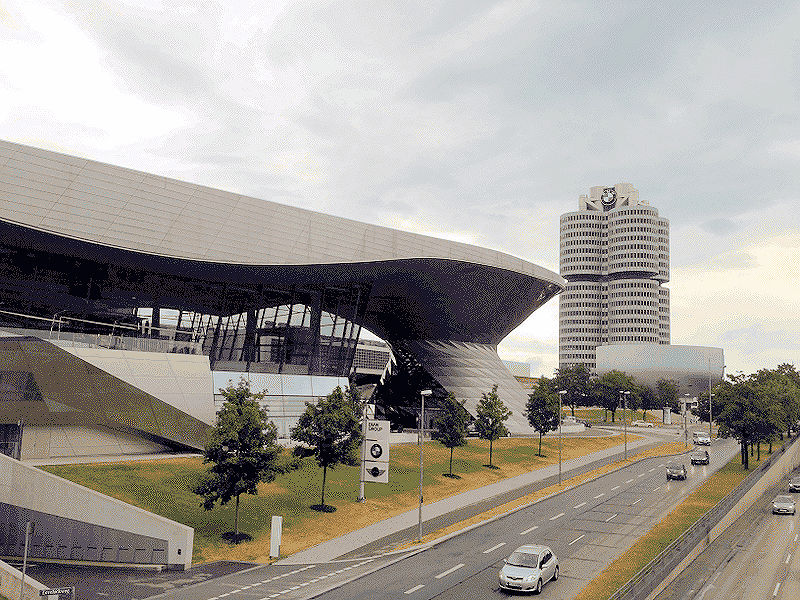 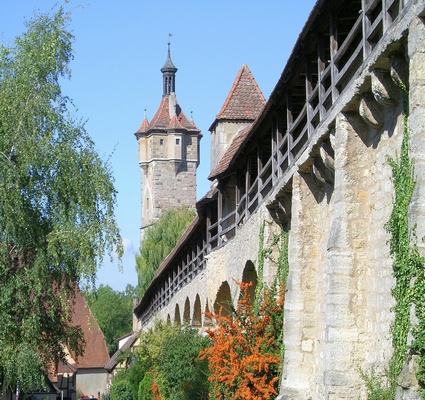 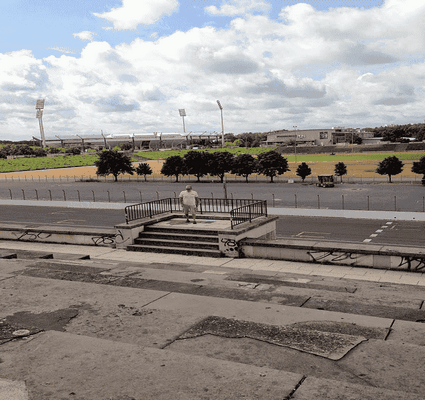 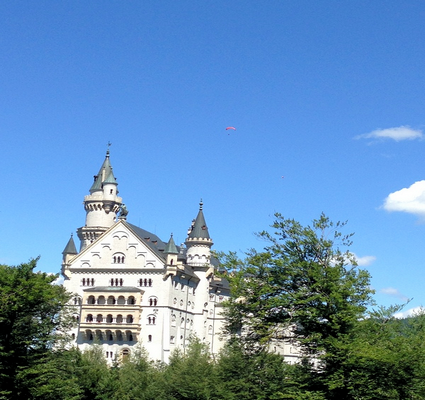 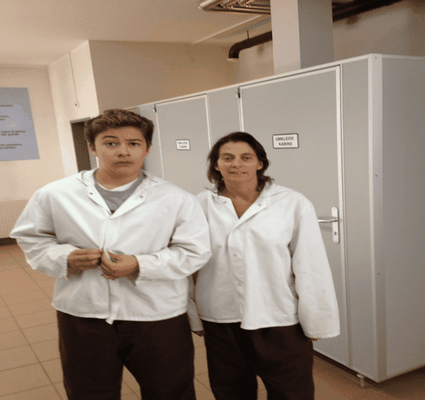