Shop Now
We selected this city as the starting point for our coastal route drive north. This decision was based upon Santa Barbara's beauty, it's Spanish Style architecture and the proximity to the beach from our incredible hotel.

We splurged for this stay, and utilized the Hilton Santa Barbara Beachfront Resort. The hotel's location was a big plus, the beach was just across the street and perhaps 200 yards from Stearns Wharf. 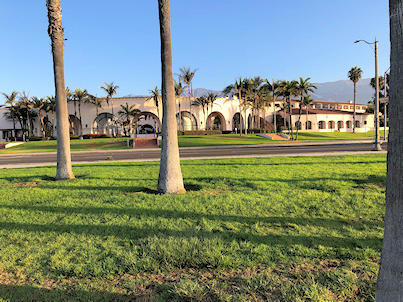 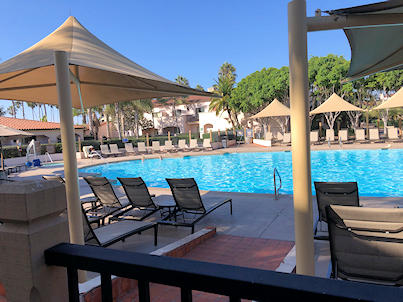 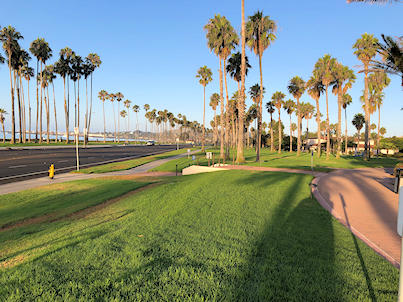 As you can see in these pictures, and as you will be able to see in any reviews of this hotel, it is beautifully located right across the street from East Beach & the Pacific Ocean. The hotel is comprised of 8 Spanish style buildings, large interior court pool, bar & dining room, etc. There is even a place to rent bicycles, which is great because there is a very nice bike path named "Beachfront Breeze" which runs along the coast for 9.3 miles.
NOTE: Click here to view a complete list of the Santa Barbara bicycle trails. 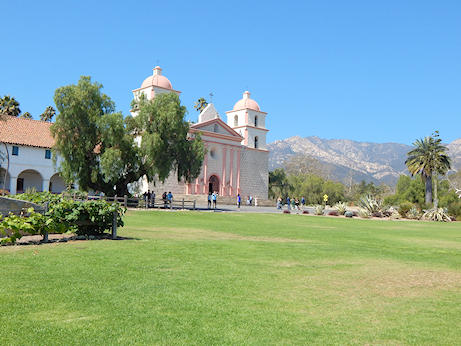 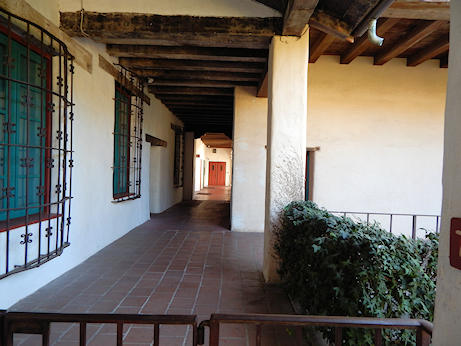 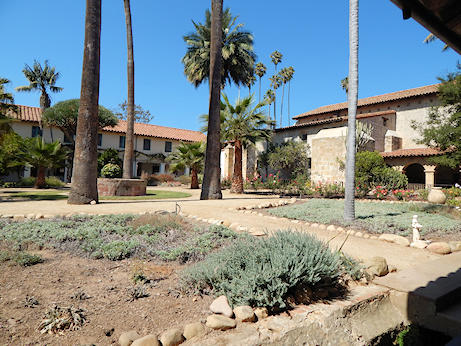 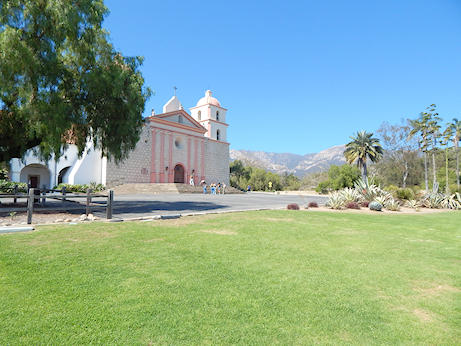 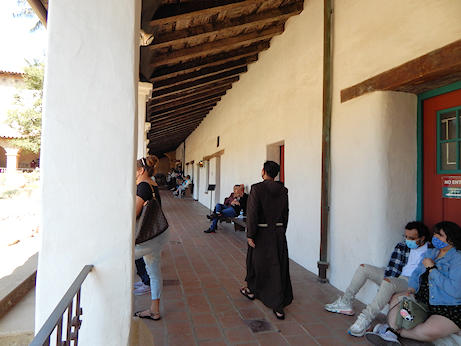 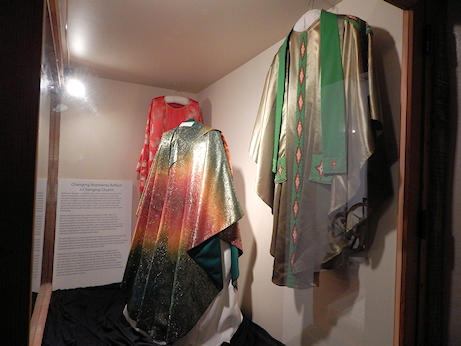 Mission Santa Barbara was established on December 4, 1786 by Fr. Fermin Francisco de Lasuen, and was the tenth of the 21 California Missions to be founded by the Spanish Franciscans. Today the Mission operations include a museum, gift shop, cemetery and mausoleum, and several historic gardens, as well as being the home to a community of Franciscan Friars on about 15 acres. The Mission is also home base for Saint Barbara Parish, which operates under the Archdiocese of Los Angeles, the Santa Bárbara Mission Archive-Library, a separate Franciscan-sponsored non-profit, and a Novitiate which provides the first year of education for Friars in training from across the United States. 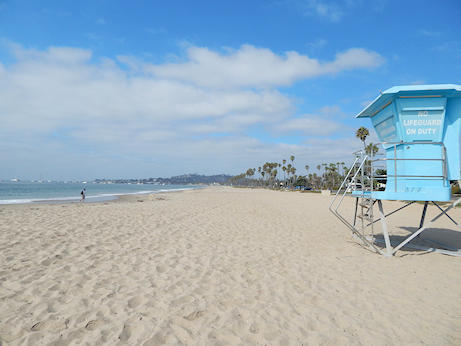 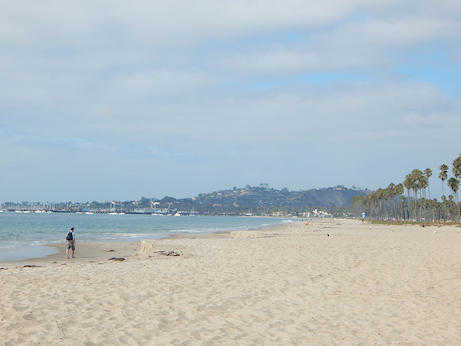 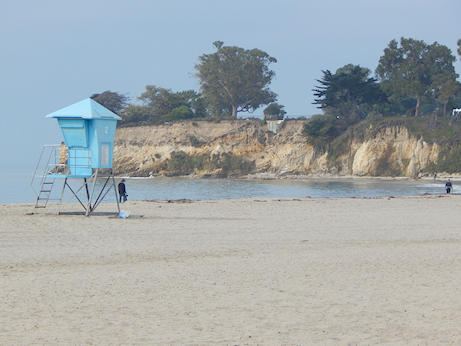 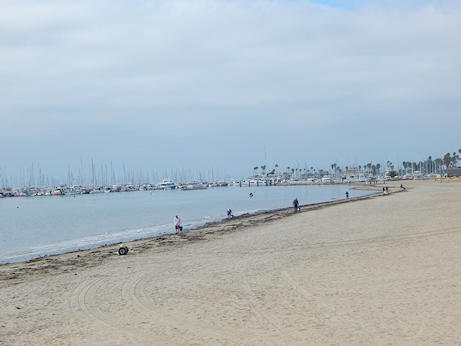 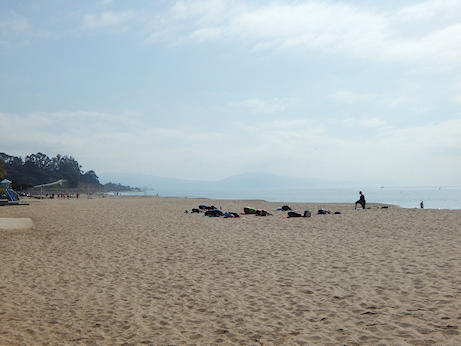 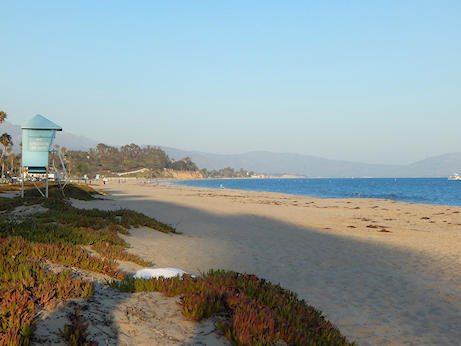 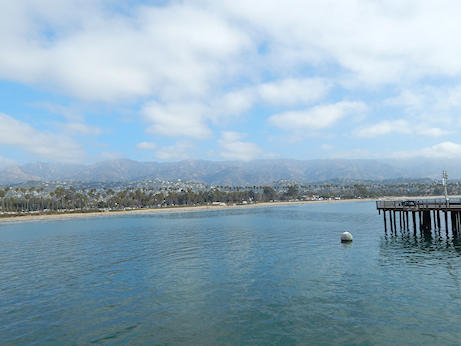 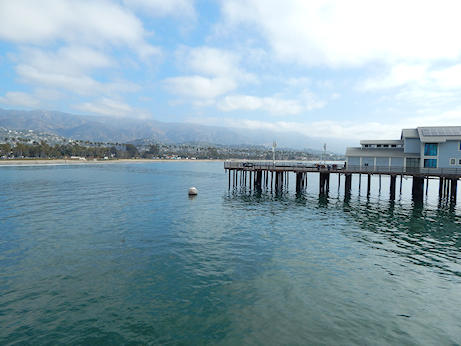 The large image above is of Cabrillo Park, a multi-use park situated adjacent to the Hilton Santa Barbara Resort & across the street from East Beach. 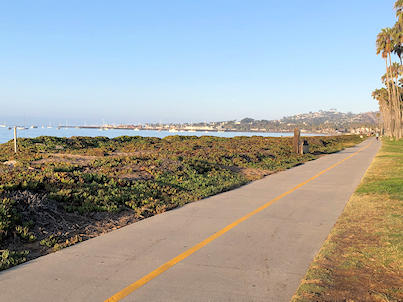 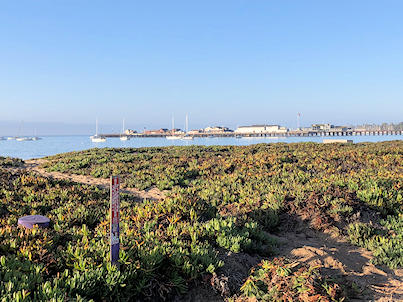 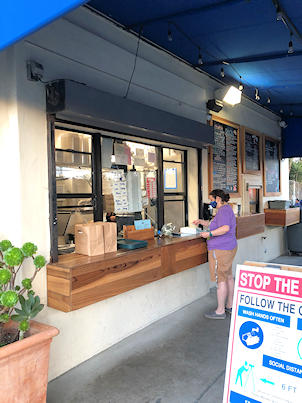 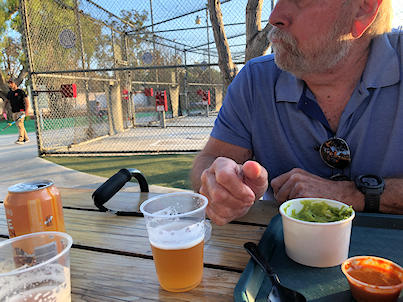 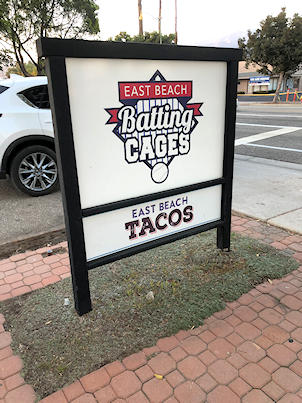 One evening we were not hungry enough for a "formal meal" and research had revealed to us that there was a good taco place nearby on Milpas Street. So we walked over and found East Beach Tacos doing a brisk business and we could easily see that the crowd was enjoying the Mexican food. We had tacos, chips & guacamole and it was very good. This is an "order and we'll let you know when it is ready" kind of place, with a number of tables near the batting cages.
Click here for their website.

Santa Barbara is a unique city in California; it has a diverse economy that includes a large service sector, education, technology, health care, finance, agriculture, manufacturing, and local government. Education in particular is well represented, with four institutions of higher learning on the south coast: the University of California, Santa Barbara (UCSB), Santa Barbara City College, Westmont College, and Antioch University. The city is served by Santa Barbara Airport and train service is provided by Amtrak, which operates the Pacific Surfliner, which runs from San Diego to San Luis Obispo. The Santa Barbara area is connected via U.S. Highway 101 to Los Angeles 100 miles to the southeast and San Francisco 325 miles to the northwest. Behind the city, in and beyond the Santa Ynez Mountains, is the Los Padres National Forest, which contains several remote wilderness areas. Channel Islands National Park and Channel Islands National Marine Sanctuary are located approximately 20 miles offshore.

Santa Barbara has a warm-summer Mediterranean climate characteristic of coastal California. Santa Barbara's weather was ranked number 1 in the United States in 2018 by U.S. News & World Report. Because the city lies along the ocean and parallel to the predominant westerly winds, sideshore and light onshore breezes moderate temperatures resulting in warmer winters and cooler summers compared with places farther inland.

The history of Santa Barbara is long, complex and involves a number of countries, here is a quick list of the historical highlights but for a more complete description click here to view the Santa Barbara Wikipedia Page.

To view our entire set of images from our Santa Barbara visit, click here